Carly's View welcomes Madelaine Grant, author of The Sweet Touch, a contemporary romantic comedy from publisher, Soul Mate Publishing. Read on to learn a little about Madelaine, her book, and a recipe.

Towards the end of writing “The Sweet Touch”,  I had an amazing epiphany. I realized parts of my own life coincided with events in the novel. For example, I met my second husband during the month of February. Kate Bromley, the heroine, meets Dan Brookhouse during February. In both cases the men were single dads with hyperactive boys having their seventh birthdays at almost the same time. Another similarity was the fact that the heroine is a nutritionist and a vegetarian who believes a good majority of one’s diet should be based on raw fruits and veggies. In my own life I became interested in healthy eating in my thirties, attended national conferences, and chapter meetings to find out more about a healthy lifestyle.

Kate is a triathlon competitor and runs, bikes, or swims every day after finishing teaching. I was always athletically inclined and studied modern dance from my teens to late fifties. I still swim almost an hour every day to keep in shape.

Even the men have similar tastes. For example, the hero, Dan, owns a chain of steak and rib restaurants. He loves a thick juicy steak although he feels guilty about that when he sees Kate eating her meals. In my case my husband was a meat and potatoes man. On one of our first dates he brought a steak and two potatoes to my apartment and suggested we eat at home. He wondered how good my cooking abilities were, he later told me. He was pleasantly surprised that I didn’t burn the steak and the baked potatoes came out just right. (This is when I was still eating red meat).

My husband also worked in the food industry and knew almost every good restaurant in the state of Connecticut, where we lived. In the book the hero and heroine take trips together and enjoy being with each other. In my situation we tried to plan getaways, even for a long weekend, to be alone and rejuvenate from our busy lives.

I wonder how many writers find similar autobiographical details emerging from their fictional narratives. Perhaps my subconscious mind had been simmering with these ideas for years before they came out in my novel.  Of course most of “The Sweet Touch” is fiction as are the characters, but I’m sure I must have known people in my life with similar personalities. Maybe all writers take in situations unconsciously and let them simmer until they are ready to write about those people and situations. When I’m traveling I love to people-watch, seeing how they move, how they talk and what they’re talking about. It’s more interesting than reading a book at times.

Blurb for “The Sweet Touch”

Raw Food and fitness enthusiast Kate Bromley is content with her life teaching nutrition and gardening to children and competing in triathlon races. Platonic friendship are fine but no serious relationships for her. After marrying at seventeen and spending five difficult years supporting her husband through medical school, she wanted a college education. Her husband rebuffed that idea telling her she’d be so busy raising children she’d have no time for anything else. After leaving that marriage she spent years working and getting the education she desired. She is not about to give up her hard-won independence.

Single dad Dan Brookhouse meets Kate when she’s demonstrating how to create raw food desserts at a local mall. He owns a chain of restaurants featuring steaks and ribs but would like to introduce new ideas to his chefs. He feels an instant attraction to Kate and loves the chocolate pudding she creates.

Kate is determined to keep her relationship to Dan strictly business but she’s drawn to him on so many levels. Can she keep her freedom and still have a relationship with Dan? For his part, Dan knows he has to play it cool and be patient in order to win her love. Can these two strong-minded people find happiness together?

Each chapter of “The Sweet Touch” ends with a healthy vegetarian recipe which is usually mentioned during the narrative. Here’s one of my family’s all-time favorites – Mock Tuna Salad.

In food processor pulse together one 14 ounce can drained chick peas, two ribs of sliced celery, two sliced scallions (or one quarter cup chopped red onion) and one quarter cup toasted walnuts until consistency is like chopped tuna fish. Empty into bowl and add four tablespoons veggie mayonnaise (I use grapeseed mayonnaise), one teaspoon Dijon mustard, one tablespoon fresh lemon juice and a dash of sea salt. Mix well and serve on crackers or toasted bread. 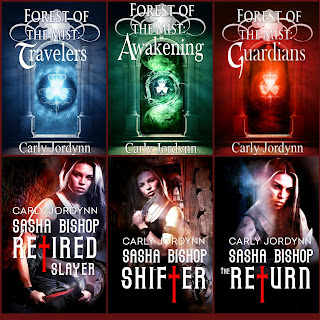 Posted by Carly Jordynn at 6:23 PM