Carly's View welcomes writer, Christina Kirby. Today Christina will share with us her views on picking locations for your story.

Christina is the author of the Warm Springs Trilogy, the Survival of the Fittest Series, and writes YA under the name Kirby Hall. She holds a degree in Public Relations from Auburn University and is currently a stay at home mom to two sons. An avid reader of romance and obsessed with good TV, Christina likes nothing more than to talk pop culture with other fans. She also believes a copy of Entertainment Weekly and a chocolate chip cookie can cure anything.

In the past, I used the old saying “write what you know” where it applied to setting by continuing to set my stories in Georgia, the state where I was born. Whether it be the trilogy set in small town Warm Springs or the first book in my Survival Series unfolding in Atlanta, I never ventured too far from the familiar. But, this time around I’ve left the heat and smells of jasmine I’m accustomed to behind and crossed the ocean.

In my latest book, A Light In the Dark, my hero is on a mission to rediscover his passion for life and in doing so he makes the brave decision to return to school. He’s uneasy on his new path and what better way to show such a drastic change than to send him to school in England? It turns out it wasn’t only Bailey who was forced to break out of his comfort zone.

Though writing about a new place with different expressions and customs was difficult at times, it was also a lot of fun. The research was interesting and by the time I was finished I too longed to take a trip to Oxford. Hopefully, readers will feel transported and maybe we’ll all be inspired to take a page out of Bailey’s story and not be afraid to break out of our comfort zones.

Blurb from A Light in the Dark:

After surviving a life-threatening illness, Bailey Honeycutt is struggling to find his footing in life and in his career. With a bold decision to step out of the spotlight, he crosses an ocean to return to school in search of something to fill the void. It turns out it might not be a what so much as a who that can pull him out of the darkness.

Brie Freeman is on the five-year plan and, after one man almost ruined her future, she’s finally back on track.  As soon as her degree is in her hands she’ll be free to move to the United States and pursue her dream job as a curator, but she never planned on an encounter with Bailey Honeycutt.
They’ll each have to let go of their pasts to fully embrace a chance at the future, but what happens when the past won’t let go?

Excerpt from A Light in the Dark:

They walked arm in arm down the path to the water’s edge and as they did, the music sounding from the guitar grew louder. Between the small cluster of people who’d stopped to listen, Brie could make out the man playing. He was propped on a tree stump with his legs spread and a coffee cup resting between his feet.

"Let’s move in a little closer.” Jessica tugged her arm and half dragged Brie until they were directly in front of him.


“This is hardly a little,” Brie murmured out of the corner of her mouth.

Brie bit her tongue and tried not to feel foolish as she concentrated on the music. After all, the man wasn’t paying any attention to the growing crowd. His head was bent and nodding to the rhythm of the song. She stood mesmerized as he glided from one familiar song into another and then into something she didn’t recognize.

His fingers moved with agility across the strings and though his jeans were torn and his shirt wrinkled, he didn’t look like the usual street performer. Between the way his hair was cut short and the intricate tattoos covering one of his arms, he wasn’t at all what she’d expected.

As he strummed a final chord the crowd broke out into applause. The man’s head rose and he nodded in thanks, and then, meeting Brie’s eyes, offered up a grin.

“That was brilliant,” Jessica said. “Do you know any other Survival of the Fittest songs?”

Though Jess was speaking from right beside her, the haze Brie was caught in made her seem much further away. She wanted to offer a compliment or at least a hello, but she couldn’t find the words. So instead, she continued to stare as though mute.

He chuckled. “I know a few. Which one would you like to hear?”

Jessica bounced on her toes. “Dark Days is one of my favorites.”

He played the requested song, but this time he sang as well, his American accent doing nothing to help Brie compose her nerves. As his voice rose and his deft fingers moved along the neck of the guitar, she couldn’t stop herself from wondering what his hands would feel like on her body. What was it about men and music?

“He’s completely fit,” Jessica whispered from beside her.

They rarely had the same taste in men, but this time Brie couldn’t argue. There was something interesting about the man before them, some sort of depth projected as he sang. She felt pulled to him, suddenly curious as to what he was thinking. It was the same way she wanted to go back in time and talk to the painters who’d created the works of art she studied. The scholar in her needed to know more.

The song finished up and Jessica clapped at a volume bordering on embarrassing. “That was completely amazing. Thank you. They’re a favorite of mine, well that’s obvi, I guess.”

“Mine, too.” He turned his gaze on Brie again. “And, what about you? Are you a fan of Survival’s music or is there someone else who would please you more?”

Jessica elbowed her in the side.

“No, I mean it was better than fine. Here,” Brie dug around in her pocket and pulled out a coin where she then proceeded to toss it into his cup. Coffee splashed over the rim and splattered down the legs of his jeans. He shot to his feet and set his guitar to the side.

Her stomach dropped at the same time she dropped to her knees and tried to wipe his legs dry with her flowery scarf. “Oh my God, I’m so sorry.” She continued to pat at his legs until a hand appeared beside her face. She tilted her head back, her cheeks scalding, and stared at his outstretched hand.

“It’s all good. No harm done.” He reached a little further and she took his hand, unsure if it was simply her embarrassment or something else that sent the jolt through her at his touch.

“Seriously, I’m such a git.” She backed up a step and didn’t miss the look of amusement Jessica was sending her way. “I should’ve looked first.”

“It’s no biggie. I was heading out anyway.” He gathered up his guitar and his cup. “Maybe I’ll see you two around.”

“Sorry again,” she called as she buried her face in her friend’s shoulder.

Jessica patted her on the back. “It’s okay. I’m sure it happens all the time.”

*****
Carly Jordynn is an author, blogger, and speaker. Her next book, Forest of the Mist: Guardian is due to come out on December 5, 2018, with Soul Mate Publishing. 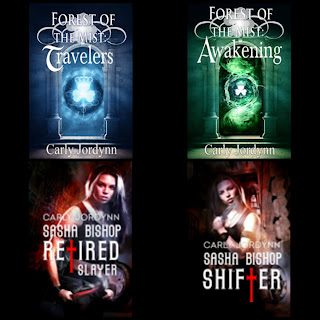 Posted by Carly Jordynn at 8:18 PM