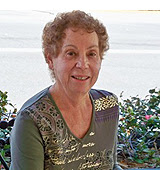 Born in Brooklyn she always had access to the exciting New York City scene. The Museum of Modern Art was the hangout for her and her three art-inclined friends during high school days. She became a commercial artist, an art teacher, and an assistant director of art for a small museum in Connecticut – The Stamford Museum & Nature Center. Additional graduate training in art therapy led to forming a non-profit company with a dance therapist – The Arts for Special People, Inc.
After marrying and moving to Connecticut, Madelaine continued her art studies while raising a daughter. Shortly afterwards she divorced and remarried. Together they raised his son and her daughter – not exactly an easy task – but managed to survive the hellish teenage years.

When her husband was offered an early retirement they moved to Southwest Florida near the beach so he could fish and she could paint and write. Madelaine joined the Romance Writers of America and the local chapter, Tampa Area Romance Authors. Her first full-length romance novel, “A Total Mismatch” by Madelaine Grant (pen name) was recently published by Soul Mate Publishing.  A contemporary romantic comedy, it takes place in Manhattan and involves an artist, naturally. She loved writing the story and hope others will enjoy it as well. By the way should you want to view her abstract paintings you can google Madelaine Ginsberg, Contemporary Florida Artist.

Blurb for” A Total Mismatch” by Madelaine Grant

Fate brings polar opposites Samantha (Sam) Peabody and Jordan Hart together. Free spirit Sam is an artist, occasional belly dancer, and sloppy housekeeper while Jordan is a lawyer, fitness and neatness freak, and lover of ice cream.
The one thing they have in common is their dislike of big, fussy weddings.
After a fight with her oldest sister, Andrea, Sam decides not to attend Andrea’s lavish wedding. When Jordan is invited to a wedding, he asks Sam to accompany him, not knowing it’s Sam’s sister’s affair. Complicating Sam’s busy life is an offer from a local craft beer company to belly dance for a TV ad and become the symbol of their new beer company.
Sam’s disastrous first marriage and the difficult dynamics in her family make her insecure about this new relationship. Besides, she hates the idea of marriage. Can Jordan’s persistence win Sam over and dissolve her fears?

Excerpt from “A Total Mismatch”

This was the signal for her to ask him what he did but she really didn’t care. He’d drop her off in a few minutes and that would be it. “Look, I don’t mean to be rude but it’s pointless to find out more about you.” The fact that she was attracted to him in ways she couldn’t understand was another reason to end things. In the close confines of the car her thigh was inches from his firmly muscled one, much too close for comfort. She’d felt the strength of his hands as they’d held her. The heat from his touch had penetrated the fabric of her lacy wool sweater sending sparks in all directions. This was one dangerous situation. Gazing out the window she noticed they were approaching her neighborhood.  “It’s just a few more blocks. And then take a left. I’m on the right side of the street.”

Jordan was in no hurry to reach Sam’s home. An inviting image of a hot fudge sundae had invaded his mind. One of his all-time favorite ice cream shops was in the vicinity. “I never did get to dessert tonight. How about we stop at the Frozen Fiend Ice Cream Palace? I’m in the mood for hot fudge over butter pecan.” He turned to her with a hopeful expression.

“You gotta be kidding,” she exclaimed. Dessert was the last thing on her mind.

He shook his head. “I’m not. Besides, you owe me for rescuing you this evening.”

He did have a point, a slight one but still a point. Before she could consider the consequences, she blurted, “I’ve two flavors of ice cream, hot fudge and whip cream.”  Now why had she given him this information?

“Heavenly Hash and Pecan Crunch,” she said still bemused she’d invited the guy into her home. How had that happened?

“That’ll work.” He made a left turn and drove slowly down the block. “Which place is yours?”

Posted by Carly Jordynn at 4:45 PM