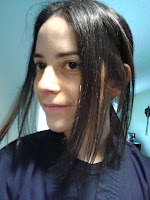 Today on Carly's View, I have the pleasure of interviewing a character from CROWDANCER, a book written by Abrielle Fuerst. Her name is Navyra and she is a powerful sorceress. Welcome Navyra! It's great to speak with you today. To start off, how old are you?


Navyra: 23, and it’s been a journey. I was born a princess and banished at 13, then pursued across my country despite everyone’s “best intentions” to protect me. I learned to make a living communing with the dead, until I finally sought refuge amongst my dearest enemies.

Q: And what enemies would those be?
A: They are the Crowdancers, elite warriors of Kanda’s army. They use forbidden things like spirit-sight and death arts, and Mother swears they’ve given up their souls to learn to do it.

Q: And do you think it’s true?
A: Of course not. Everyone has a soul, but it’s also true that souls can be misplaced. Souls can be forced out of their rightful bodies and imposed in someone else, and the bodies that remain are easily manipulated. The Crowdanceres all have souls. Just perhaps not the ones they came with.

Q: Is there anything you’re scared of?
A: The dark, if you must know it. Childish, isn’t it? I am perhaps the greatest sorceress who ever lived, and yet I still fear the dark and I’m scared of being lonely.

Q: How do you see yourself?
A: Strong, and gravely tested. I am beautiful, but you knew that. Scarred, yes, and half-crazy by my own reckoning. Necromancers all go crazy after enough time has passed.

Q: When did you first realize you were a necromancer?
A: Necromancer. Oh, that word! It’s not a word I knew about until long after I knew I did it. But I had dreams, as a child. Heard things whispered in the castle halls that no one had said for decades. I realized right away. But I knew what would happen to me if anyone found out. So I lied. Don’t blame me.

Q: What was your life like, growing up in a castle?
A: Quite boring, when I had my lessons or had to wear those layered dresses instead of court boots like a man. It was better sneaking out and running barefoot through the courtyards, pretending to be a grown-up. Ironic, isn’t it? But it was frightening too because castles all have spirits, and no small amount of them. Castles have assassins too, and you remember that if you ever have the misfortune of visiting one.

Q: And you got in trouble frequently?
A: Oh yes. Until the day I transgressed so far I was banished.

Q: What happened to cause that?
A: I finally told the truth. I told the entire castle I saw spirits. My father’s ghost, specifically.

Q: What is your most vivid memory?
A: Seeing that very wraith stroking my mother’s cheek. He was looking right at her and his fingers brushed her face, and she kept staring straight ahead as though she didn’t even notice.

Q: Do you fear the spirits?
A: What fool doesn’t? But they fear me too, so we get on well enough.

Q: Name three things that you despise.
A: Despise. It’s such a strong term. I despise ships, for good reason. I despise the way the sage’s cellar smelled. And I despise Bernard. You would, too, if you knew the man. Be thankful that you didn’t.

Q: What is one embarrassing item you possess, that you wouldn’t want anyone else to know about?
A: The ghost of a drowned man who lives in my house near the ocean.

Q: Who do you look up to? Who do you look down on?
A: The only person in the world I’ve looked up to is my brother, Jared. And later Imari, but I won’t actually admit to liking Imari so don’t you tell her, either. Down on? I was raised as a princess and banished for my own protection; I look down on everyone who’s ever dared to truly chase me.

Q: Any last words of advice to our readers?


A: Don’t bargain with ghosts. Their prices aren’t worth it.

Read on for a taste of CROWDANCER. . .

Sorceress for Hire. Employ at your own risk.

I'll give you the whole story.

I rode a fisher vessel to the nearest village with a port. Hid out a whole day, knowing just how close I was to being captured. I bought passage on seven ships under seven different names--and then I slipped away on one of the few vessels that I hadn't paid for. You could say that I'm wanted.

I go by Aryin now. I am a necromancer. I am of the most skilled of those within my trade, and I am fleeing for my life within enemy country, to escape a decree from mine that will kill me if I'm found alive. Though secretly sometimes, though none must ever know it, I am still Navyra of Yoshai.

Want to know more about Navyra's creator? Check out Abrielle's bio below. . .

Abrielle holds a third degree black belt in Taekwondo, has five younger siblings and harbors a crazy fear of driving on the freeway. She spends so much time pretending to be a ninja that she now makes a living at it, travelling the country teaching martial arts and self-defense.
She is a rogue and nonconformist.
She thinks she can sing, but don’t let the assumption fool you.
Abrielle writes about kick-butt women who take no prisoners and don’t take no for an answer.
For more about the author, please visit facebook.com/abriellesarahfuerst or abriellesarahfuerst.com.

Posted by Carly Jordynn at 9:13 PM