Author Interview with Susan B. James, author of Time and Forever

Today on Carly’s View, I would like to welcome author and actress, Susan B. James. Susan wrote the book, Time and Forever, which I had the pleasure to review. Thank you for joining me, Susan.

Thanks, Carly. It’s my pleasure. I so enjoyed your first Forest of the Mist book, Travelers. Can't wait for the sequel.

CJ:       You’ve led an interesting life, you’re an actress, author, and voice actor. Can you tell your readers a little about those careers?

SJ:    I’m still pursuing all three careers. I am delighted every time I have a chance to audition for a role, or a voice-over project. I’ve always loved acting. I did get to sing in a Broadway Musical, The Robber Bridegroom in the 1976-1977 season. That was a dream-come-true. I’ve also done a number of TV and short film projects. Recently I’ve been doing a lot of improv. I started Musical improv  and just finished the 301 level. I think my son Chris and I are going to be a team. We’re calling it Son of a Mother. 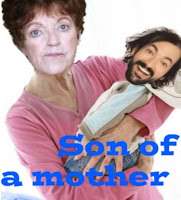 CJ:        You started your writing career as an author of children’s books. What made you decide to take the leap into adult fiction?

SJ:     Pure accident. I’ve always adored romance. I have every Nora Roberts, Susan Elizabeth Phillips, Jayne Ann Krentz, Lyn Kurland, Jude Deveraux, and Georgette Heyer title. (The list goes on and on.) When my children’s critique group started a blog in 2009, my first post was about the joy and challenge of doing NaNoWriMo. To write the post, I had to sign up to participate. Two days into November my Jewish/Catholic guilt genes forced me to sit down at the computer to begin my journey to 50,000 words. I’m a pantser. I took a deep breath and, started typing. By the first sentence I knew I was writing an adult novel. And I loved doing it.

CJ:        Time and Forever is a time-travel romance. What inspired you to write this story?

SJ:     I was in my sixties when I started this book. I needed to read a book affirming second chances. What happens if your first love doesn’t work out? What if  your soulmate dies? Is there still time for a happy ever after?

CJ:      Did you have to deal with rejection with your books? If so, how did you handle that situation?

SJ:   Of course!! I have an email folder full of them and a paper file folder with others. As a performer, I was used to dealing with rejection. I thought it would be easier as a writer. (It’s not.) There are only two answers to rejection: Find another place to send it, or rewrite and find somewhere else to send it. We don’t all love the same books.

CJ:   As an actress, you get to be creative in a whole other way. If you could choose your dream co-star who would it be and what scene would you play together?

SJ:   Already did it. My  "wasband", Barry Corbin and I did Dylan A play about Dylan Thomas. Caitlin Thomas was a dream role. I’d love to work with Bradley Cooper or Hugh Jackman in anything! Who wouldn’t? 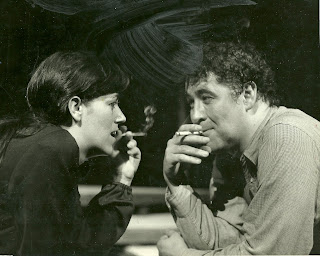 CJ:      What was your most satisfying event in your career?

SJ:   In my writing career  - Time and Forever being a finalist in the 2015 Golden Quill for Best First Book and being a Finalist in the 2015 RONE Awards for Best Time Travel.
In acting. -  Getting my first regular role on a TV series. I got the part of Renee, the  agent on Warren The Ape when I was sixty six. The series didn’t last, but the thrill did.

CJ:    What is something you want your readers to know about you?

SJ:  Every time I sit down at the page, I am terrified nothing will come out.

CJ:   What’s next in the life of Susan James? Any new releases, WIP’s, or acting roles you can tell us about?
SJ:   I just finished shooting an episode of Tim and Eric’s Bedtime Stories for the Cartoon Network’s Adult Swim. The episode is called Sauce Boy. I play Mama Pantone who is a kind of mafiosa. I get to sing (badly) and the costume and makeup are so fun. So much fun to shoot. Here’s a picture.

I have two adult novels in revision, Kate’s Hero and Maybe This Time. Both are second chances novels.

CJ:   Where can your fans find you on social media?

BIO of Susan B. James:

Susan B. James has been a bookaholic since the age of eight.
She met and married her true love and got to sing in a Broadway musical.  They moved to California where they could pursue TV and film acting.
Two children and two grandchildren later, Susan is still a bookaholic and absolutely believes in magic and Happily Ever After. She is grateful to all the writers who enrich her lives with their stories.
Time and Forever, her debut romance is a finalist in the 2015 Golden Quill for Best First Book and in the RONE Awards for best Time Travel Book. She has two more novels in revision.
Susan also writes children’s books as Susan J Berger. Her fourth picture book (Her great American Novel) Log on Log, is under contract to Beach Lane Books, Allyn Johnston’s imprint at Simon and Schuster. Currently she is shopping a mid-grade novel laced with magic, three picture books, and revising her non fiction book Earthquake! for a second edition.

Facebook page is https://www.facebook.com/SusanJames
Twitter https://twitter.com/susanjberger
She blogs Children’s books with her critique group at Pen and Ink http://thepenandinkblog.blogspot.com/
Her adult blog is SusanBJames  http://susanbjames.blogspot.com

TIME AND FOREVER by: Susan B. James

2014. Sherry’s a successful businesswoman with two grown sons. Lorena’s an actress on a popular sitcom. Sherry’s husband dumped her for a younger woman eighteen years ago. Lorena’s husband died of cancer.

Sherry wants a second chance at Love. Lorena doesn’t believe that’s possible. But when a glitch in a Virtual Reality Adventure game sends them back to the real 1969, anything can happen.

READ MY NEXT POST FOR MY REVIEW OF TIME AND FOREVER. . .