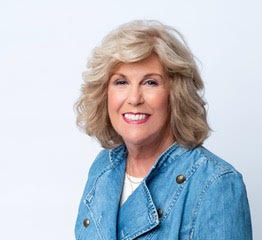 Having grown up in a small Tennessee town, I write about a charming small town in the foothills of the Smoky Mountains in my Azalea Valley Series . My husband and I live near Nashville and travel as often as we can while still trying to make time for our family including two precious grandchildren. Sometimes settings and experiences from our travels make it into my novels. I write both contemporary romance and romantic suspense. My first novel in the series, Wildfire and Roses, recently won runner-up in the contemporary category of the Raven Awards. The latest, An Inconvenient Attraction, released earlier this week. 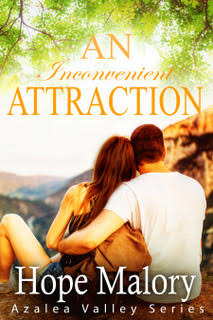 About the book:
In this return to Azalea Valley, readers will find small town charm, single parents with bruised hearts, and challenging decisions. Escaping the heat of New Orleans turns into a dangerous floodwater rescue for Dr. Lilly Barnesworth. Meeting the handsome Derrick May, father of a rescued boy, interrupts her self-prescribed retreat with her young daughters to heal wounds from her recent divorce.
Derrick declares a moratorium on women after his ex-wife ditches him. Seeing Lilly in action saving his asthmatic son forces a crack in his resolve. Both single parents fight their mutual skyrocketing attraction and neither expects Azalea Valley’s small-town magic to fuel their relationship. The question is, can they overcome Lilly’s ex disturbing her newfound peace and Derrick’s rich, aggressive client demanding his personal attention?
Excerpt:

“What are the injuries?” Lilly asked.

“Three boys were wading when a wall of water gushed through, knocked them against rocks, and washed most everything in their campsite away. The worst is a seven-year-old kid. He’s having an asthma attack and has a cut on his leg. One scout may have a broken arm and another a sprained or broken ankle. The others are bruised and scratched.”

“Send the one with asthma first, then the other two injured boys next.”

Lilly waited impatiently as men on the other side secured the first boy to the rope and the fire fighters pulled him across. The child wheezed and gasped for breath. “Tell them to send the dad next. He may need to go to the hospital.”

A paramedic unhooked him and ran with him toward the ambulance. “I’m a pediatrician,” Lilly said as she showed him her medical badge. “Put him on the gurney. I’ll check him out. He has an inhaler. Stand by. He may require oxygen.”

She administered the inhaler. “Try to hold your breath until I tell you to stop.” After ten seconds, she gave him the signal to breathe.

He was listless but his breathing soon began to ease. She spoke in the soothing voice she employed when talking to her frightened patients. “Sit up straight for me and take long deep breaths like this.” She demonstrated and listened through her stethoscope. He started to cry and called for his daddy.

“You’re safe now and your daddy is on his way. My name is Lilly. What’s yours?”

“Well, Jonah, you are doing great. Are you hurting anywhere besides your leg?” The cut was not as severe as she’d feared and had almost stopped bleeding.

He shook his head.

Moments later, his dad dashed to the ambulance. She glanced behind her and said a cursory hello but continued to focus on Jonah.

Lilly checked him for other injuries before cleaning the wound on his leg and bandaging it. “You were very brave. You should be fine.”

Turning to the father, Lilly looked directly at him for the first time. His handsome face distracted her for a moment. Get it together. Pushing aside her surprising reaction and lapse of concentration, she composed herself and said, “His cut doesn’t need stitches. What about you? Are you hurt?”

“No, just thankful Jonah is better.”

The second child was across. “I need to assist another patient. If you can hang around, I’ll check on him again when I finish,” she said hoping he would.

She forced herself to focus and launched into action with the next child. First responders scrambled to extricate the remaining trapped children and adults before the rapidly rising water engulfed them. She checked each one as they made it to safety.

Rooted to the spot, she held her breath as the last man, now over knee deep in rushing water, clung to the tree to avoid being swept away. A fire fighter hurled the rope three times and the scout leader missed. On the fourth try, he caught it and wrestled the life jacket in place. With one hand, he battled to zip the jacket. After several attempts with the water rising and his head barely above the water, he managed to secure it and buckle one strap. At last, after tense minutes, he threw up his hand and motioned for them to pull him across.

She cheered with the rest of the crowd when they released him. After she checked on him and found him visibly shaken, but not injured, she returned to Jonah and his dad. “How is he?”

“He seems to be okay.” His posture suggested relief.

She removed a business card from her medical bag and wrote her personal cell number on the back. “If you need anything or have any concerns, call me.”

She placed her hand in his warm, strong one. His touch sparked an unexpected sensual response. “Hello, Derrick.”

His intense gaze swept over her face and focused on her eyes as if he saw her for the first time. He broke the stare when she withdrew the hand he hadn’t yet released.

Hello, Lilly. Welcome to Azalea Valley. Tell me a little about yourself.

Lilly: I co-own a pediatric practice in New Orleans and live with my precious daughters, Emily and Paige, ages seven and five. My husband, or rather ex now, lives in Rome, but I don’t want to talk about him. The girls and I traveled here to unwind and visit family.

I’d love to hear about them.

Lilly:  I grew up an only child, but I have two half-brothers and two half-sisters who live here. I only learned about them a couple of years ago. Long story, but there was a huge family secret about my birth mother. Since this is a small town, you may know them. The McLemores.

Everyone in town knows them. A well-respected family. And I have heard rumors surrounding your birth.

Lilly: Of course you have. I sometimes forget how quickly news travels.

Yes, it does. Besides work and family, what do you enjoy doing?

Lilly: I grew up traveling the world, and travel is my number one interest. Swimming comes in second. I wanted to be an Olympic swimmer when I was a girl. I suppose cooking would be next. I love to cook all the Cajun and Creole dishes New Orleans is famous for.

Sounds delicious. You haven’t been in town long and are already a well-known for helping with the flood rescue. I understand you met Derrick May. He’s a single handsome man. Any interest?

Lilly: Acquaintances. Friends at most. Well, okay, I might be a tiny bit attracted to him, but it can’t go anywhere. An inconvenient attraction. I’ll plan to stay away from him until I leave in a few weeks.

Not as easy as you think in Azalea Valley. We’ll talk again before you leave and see how that’s working for you.

Links to Books;
For An Inconvenient Attraction, fifth in the series, go to https://amzn.com/B08FMR33XL
All books can be read as a standalone, however, if readers want to follow the series, to avoid spoilers, they may wish to read them in order.
For the first four in the series:

I love to hear from readers. You can connect with me by visiting: