Today Carly's View will highlight the Ruby's Ranch series by Rhonda Frankhouser. Rhonda worked fourteen years in hospice care management in central California, before becoming a writer from her lovely Atlanta, Georgia home. Rhonda's award-winning Ruby's Ranch Series, earned a
finalist honor in the Uncaged Review Raven Awards; a second runner up in the prestigious InD'Tale Magazine RONE awards, and a Book and Benches, Reviewers Top Pic ~ Books of Distinction award. Her follow up Shadowing Souls Series and Let Yourself Believe Series, have captured the attention of both romance and mainstream readers alike. Rhonda is a happily married stepmom to three beautiful daughters; two adorable pugs, and a lazy Labrador named Dutch.

The Ruby’s Ranch Series follows a line of matriarchs with a mysterious heritage.

RONE award finalist, Book 1-Return to Ruby’s Ranch, tells Ruby Lattrell’s story. Granddaughter of the original matriarch, Ruby inherits the beloved family ranch, twenty years after she was pulled away from her childhood home after her mother, Katherine, disappeared. When she returns home, she’s greeted by beloved ghosts, haunting secrets and a timeless love.

RAVEN award finalist, Book 2-Escape from Ruby’s Ranch, takes us back one generation to view the ranch from Katherine’s eyes. We learn what really happens when she disappears and if her love for John brings her through.

New Release, Book 3-Legacy of Ruby’s Ranch, takes us back one more generation to follow the journey of the original matriarch, Rube Gautier. The moment her grandmother presses an ancient amulet into her palm, Rube’s life changes. Chosen to lead a mystical life in the service of her village, she’s expected to marry within the community and confer with the spirits to lead her people, but all she really wants is a normal life, on a ranch of her own far away from Oklahoma, with a man of her choosing. When she lays eyes on Mac, hope for a different future begins to blossom.

World War II hero, Mackenzie Adams finds more than he bargained for at a local livestock auction. When he catches sight of the fiery redhead commanding a crowd of roughneck ranchers, his heart pounds faster than it had when he’d stormed Omaha beach. He’d never seen so much passion and so much angst in such a beautiful package. Unfortunately, she’s bound to another life.

Sparks fly between Rube and Mac even as danger lurks around them. The spirits insist Rube must fulfill her destiny, and they will do what they must to see it done, even if it means taking those Rube loves away from her.

Twilight whinnied when Rube rushed into the barn and clattered loudly through the gate. A dozen other Appaloosa mares poked curious snouts over their stall railings to get a peek at the commotion.

“How’s my girl?” With her arms wrapped around the mare’s broad neck, Rube let her tears flow. The reality of Papa’s harsh words settled on her heart. She’d never have her own life. Duty was all there was.

The intuitive horse pressed against her mistress. Rube clung to her, soaking up the mare’s unconditional love and loyalty, and considered saddling up and disappearing into the mountains.

Quiet footsteps fell behind them.

“Excuse me, miss. I don’t mean to interrupt,” a familiar voice said from outside the stall.

Rube whipped around, the motion loosening her tight bun so her long, auburn waves cascaded around her shoulders. “What the hell? What’re you doing in here?” She quickly wiped the dampness from her eyes.

“Oh Lord, I’m so sorry. I thought you saw me when you ran by.” The tall, young rancher from earlier stood, again with his hat in hand and apology written on his handsome face.

When he started to move closer, Twilight stepped between them, and bobbed her head in warning. No doubt sensing Rube’s uneasiness.

“Well, I’ll be damned. Got yourself a guardian angel, I see.” He presented his hand for Twilight to sniff. “I promise, I mean no harm.”

After a few gentle words, the saucy mare pushed her ear into his hand for a scratch.

“Fastest on the ranch,” she answered, twisting her long hair back into a bun.

His hands were on Twilight, but his attention was trained on Rube. His energy tingled against her skin wherever he gazed.

“You should leave it down,” he said in a low, Southern drawl. The rasp in his voice was haunting.

When their eyes finally met, sensual sparks lit her consciousness. The heat of a blush warmed her face as she recalled his smell, his touch, the way she’d craved him in her dream. Was she still asleep? Or was she being granted one final wish before duty took over her life.BUY LINK FOR BOOKS

Join the story from the beginning: 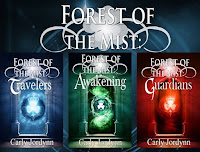