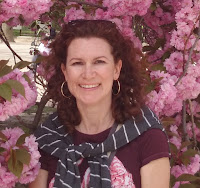 Sofie spent much of her twenties raising two boys and reading every book she could get her hands on. Once she realized that she was no longer satisfied with simply reading the books she loved, that she must write them, too, she decided to finish her degree and embark on a writing career. Mr. Darling and the boys gave her their wholehearted blessing.


When she’s not writing heroes who make her swoon, she runs a marathon in a different state every year, visits crumbling medieval castles whenever she gets a chance, and enjoys a slightly codependent relationship with her beagle, Bosco.

What made you decide to become a writer?

I went to university as a Biology major, but, like everyone else, had to take a few basic English classes. I’d always been a reader, so this was no great burden. At the top of an essay I’d written, a professor wrote, “By the way, you write beautifully.” Well, that was it. I was hooked.
Who are some of your favorite authors and why?

I love George Eliot, and her masterpiece, Middlemarch, for her ability to create a complex plot structure while never losing sight of the characters who drive the narrative. I love Judith Ivory’s novels not only for their exquisite writing, but mostly for the unforgettable chemistry between her heroes and heroines.

If you could be any character in any book, who would it be and why?

Oh, this is an easy one: Elizabeth Bennett. Why? I could say she’s an intelligent woman who speaks her mind, but is also willing to change it, and that would be true. But the real reason? She makes Mr. Darcy fall madly in love with her. And she gets Pemberley. :)

Do you have any hobbies you would like to share?
For whatever mad reason I became a distance runner about ten years ago. To this day, I can’t say I particularly enjoy it, but it’s something I feel compelled to do, if that makes any sense. Distance running is a lot like novel writing in that way. Both are work, but provoke a strange love in me.

Tell me about your first kiss? Was it magical or not so magical?

Well, I hope my Darling boys won’t read this, but my first kiss was pretty magical. I was sixteen and visiting my cousin in East Texas. Ever the wilder one of the two of us, she encouraged me to sneak out of the house one night with her and some boys. After a good bit of country road driving, we found ourselves at the Lake O’ the Pines. The sky that night was so clear we could see the Milky Way above and its reflection on the ink-black water below. One of the boys had long blonde hair and was just different enough to catch my city-girl eye. Anyway, we ended up kissing on the hood of his car beneath that star-bright sky. I never saw that boy again, and I didn’t have another kiss for over a year.

What’s an item on your bucket list that you haven’t done yet?
I’ve never gone blonde.

Tell us the best vacation you have ever been on.

Last year, I visited Ireland with Mr. Darling and the Darling boys. The eldest had just graduated from high school, so the entire trip had this lovely sweetness to it as we drove all over, hiked glorious cliffs, stomped around ruined castles, and just enjoyed being together as a family. It was wonderful.

Where do you find the inspiration for your books?

I generally find inspiration in other genres, mostly historical non-fiction.

Thank you for joining me today, Sofie.

BLURB FOR THREE LESSONS IN SEDUCTION:

Lord Nicholas Asquith needs his wife. Too bad he broke her heart ten years ago.
Can he resist a second chance at the love he lost?

When Mariana catches the eye of the man at the center of an assassination plot, Nick puts aside their painful past and enlists her to obtain information by any means necessary, even if it means seducing the enemy agent. Even if the thought makes his blood boil. Only by keeping his distance from Mariana these last ten years was he able to pretend indifference to her. With every moment spent with her, he feels his tightly held control slipping . . .

Can she trust the spy who broke her heart?

Mariana spent the last decade forgetting Nick. Now she has the chance to best him at his own game, an opportunity she can’t resist, even as her view of him begins to shift. Increasingly, she wants nothing more than to seduce her own husband . . .

It’s only a matter of time before mad passion ignites, a passion never convincingly extinguished. A passion that insists on surrendering to the yearning of the flesh and, quite possibly, of the heart.

Nick watched Lady Mariana slip through a crack in the exterior French doors. He paused. A man like him had no business following virgins into the night for he had no intention of ever marrying. Marriage and children crippled a man involved in espionage.

Yet the hesitation lasted only long enough for him to set down his brandy. In three short strides, he was through the doors and beneath an indigo sky dotted with a million stars, the sort of sky only possible outside the fog-bound city. He stood uncertainly on the stone portico feeling exposed and a thousand ways a fool.

Where had she gone?

Instinct guided him down the wide staircase and onto a crushed granite path lined with all manner of flowers. Montfort’s was the quintessential English garden with its riots of overgrown blooms of every hue, tonight rendered monochromatic by the stark rays of the moon.

He’d begun to doubt his instinct when he rounded a bend in the path and spotted her some ten yards ahead, seeming to be in no particular hurry. Her ease was apparent in the relaxed set of her shoulders and the way her hand trailed idly above the flowers, allowing their velvety petals to brush the bare flesh of her palm. The way the light washed over and embraced her called to mind Selene, goddess of the moon.

He should turn back before they ruined each other.

Just as he made to retrace his steps toward the house, she called out over her shoulder, “Are you going to skulk behind me all night?”

They were the first words she ever spoke to him. His heart kicked up a notch, and his tongue became a sodden blanket in his mouth as a series of facts occurred to him:

He’d followed her. He was alone with her. And he wanted nothing more than to touch her and know the scent of her. His stride increased in length to catch her.

“Do we need a formal introduction before you will speak to me?” she teased, presenting him her flawless profile. The moon above limned her features in a contradictory soft, yet crisp, glow. “Or are you simply shy?”

“You must know who I am,” he called out to her back.

“He speaks.” An enchanting giggle floated over her shoulder. “I know you are one of many young men who venture out to my uncle’s estate to discuss England’s politics. But who you are specifically, I can’t say.”

They reached the ha-ha, and he watched her clear its low wall with ease before turning toward the edge of the woods, him following at her heels like a lap dog hungry for the tiniest crumb of her attention.

He found himself close behind her, close enough to catch her scent of jasmine and neroli. It struck him that this wasn’t the one-note scent of a debutante. On the surface, the floral jasmine indicated the shallow innocence of her peers, but the deep bitter-orange neroli complicated that assessment and made for a more interesting conclusion. She was different.

“Why did you leave the house?” he asked.

His lips curved into a half-smile when she jumped at his words. Words so close she might have felt their dewy warmth on the nape of her neck.

Three simpler words didn’t exist in the English language. Yet that one simple word—hot—sent a spike of longing straight through him. “I suppose the air was a bit stale,” he rasped.

They climbed a short rise that overlooked a small pond, wavy beams of moonlight rippling across its fluid surface. What was he doing in the woods with this moon goddess? It wasn’t too late to turn back.

Then she spoke the next words, and he was lost.

“I wasn’t hot from stale air.” She faced him, her amber eyes, clear and unflinching, gauging his reaction. “It was you. I was hot because of you.”

No longer could he keep his emotions under a tight rein. She’d negated that control with a few careless words that struck his core with the precision of a well-aimed arrow.

“Did no one ever teach you not to say such things to strange men?”

“They tried,” she said with the assuredness of a woman with far too much experience, or maybe it was far too little. “There is nothing strange about you.”

“You should try those words on a different man,” he said, straining for a tone of paternal guidance. If she believed it, he might, too. “One who would marry you.”

“Oh, I care naught for that,” she said on a laugh.

Instinctively, protectively, he reached out and pulled her close, her upturned lips a hairsbreadth away from his, her playful eyes inviting him to bridge the distance. “Society doesn’t tolerate ladies who entertain loose morals.”

With feelings of longing, desire, and bewilderment warring inside him, he lowered his head and touched his mouth to hers, unprepared for the responding punch of electricity. His hands slid to her waist, and her fingers found the back of his neck, her nails tickling across sensitive skin, her body swaying into his in surrender.

Kisses had the power to reveal truths about two people that extended far beyond trivialities like compatibility and incompatibility. This kiss revealed a single unshakeable truth: she was the only woman for him.

It was a truth that shook him clear through to his bones.

His eyes flew open, and he broke the kiss, eliciting a tiny gasp of protest from her. He watched with a mixture of self-loathing and thwarted passion as she opened desire-glazed eyes and closed kiss-crushed lips.

“A girl like you is a girl one could marry,” he murmured. They were heedless and dangerous words that fell from his lips, and he couldn’t understand why he spoke them.

“Careful,” she whispered into the space between their lips. It was the only space that mattered in the universe. “I might hold you to such words.”

Again, words fell from his mouth of their own accord, and he’d proposed to her. There had been no biting it back.

And he hadn’t wanted to.

At least, not for another five seconds.

In the ways that mattered, he knew her.

Posted by Carly Jordynn at 9:29 PM