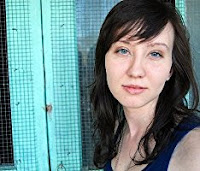 Today Carly's View welcomes writer L.S. Young, author of A WOMAN SO BOLD from Soul Mate Publishing. L.S. has been obsessed with love stories and all things historical since she first read Little Women and Anne of Green Gables at age eight. Her debut novel, A Woman so Bold, was released by Soulmate Publishing. Her novel Montana Burning placed second in the historical romance category of the Chesapeake Romance Writers 2016 Rudy Contest. Her books feature realistic characters, complex female relationships, against-all-odds love stories, and witches.

Young grew up in the rural countryside of North Florida, and now lives in Central Florida with her husband and daughter, where she enjoys gardening, spying on Sandhill cranes, wandering through antique shops, and adding to her ever-increasing mug and book collection.

I can remember being interested in writing as early as 3rd grade. I wrote some terrible and mostly plagiarized stories back then. I think reading Little Women and loving Jo March encouraged me in that direction too. I didn’t start writing steadily until around 10th grade, and I churned out a ton of inspirational historical romance for my friends to read back then! I wish my brain still worked that quickly. So it has been a dream of mine for a long time.

·         Who are some of your favorite authors and why?
I love Jane Austen and L.M. Montgomery. I don’t think that even needs an explanation. In fantasy, you can’t beat Naomi Novik or Catherynne Valente for creativity and beautiful writing. I love Rosamunde Pilcher’s cozy British romances. And on a totally different note, I love Stephen King. He’s terrifying but his characters are fascinating. I am still working on reading all of his books.

·         If you could be any character in any book, who would it be and why?
I always wanted to be Jane Eyre. Not the terrible childhood, but living at Thornfield appeals to me. Or Daenerys Targaryen. Who doesn’t want beautiful clothes and dragons?

·         Do you have any hobbies you would like to share?
Lately I’ve been into macramé and yarn on plastic canvas. I also love to bake. So far this year I’ve experimented with pies, scones, and homemade bread.

·         Tell me about your first kiss? Was it magical or not so magical?
It was so far from magical that I considered inventing a better one. I guess I’ll go with the truth. It happened in a Walmart parking lot at midnight in the freezing cold. That’s all I’m going to say about that. Fiction is much more romantic.

·         Do you have another career besides writing? If so, what is it?
Not really. I worked in childcare and then taught English for a few years and now I’m a stay at home mom.

·         What’s an item on your bucket list that you haven’t done yet?
I love the ocean and I’ve always wanted to get a scuba diving certification, but the thought of all that deep water (and sharks!) scares me off a bit, and lately I’ve been considering taking up stand-up paddle boarding instead. At least paddle boards float!

·         Tell us the best vacation you have ever been on.
My family used to spend two weeks in North Carolina every summer and it was always great, but there is one year that stands out in my mind. There was no particular reason, except that it was a very poignant time in my life. I was still in college, I had a new camera, I read a lot and went for a lot of walks at twilight with fireflies all around, and there were horses pastured near the house where we were staying. Everything had such a beautiful quality to it. I feel like it was the last summer before I really grew up.
·         Where do you find the inspiration for your books?
From other historical fiction and romance, history, and everyday life. My first novel was inspired by my love of North Florida where I grew up, my second novel (a western romance) was inspired by watching When Calls the Heart and a dream I had. My current work in progress was inspired by my love of fantasy and Nordic folklore, and the sight of an old stone birdbath filled with water in the moonlight. In the beginning of the story, the heroine and her sister are scrying in an old stone basin.

·         Is there anything else you would like to share with your fans?
I’m currently at work on a possible sequel to my second novel Montana Burning, and I am researching for a NA historical fantasy romance set in 17th century Iceland.

Want to know more about A WOMAN SO BOLD? Read on for a short blurb and excerpt:

Love. Betrayal. Redemption. Landra Andrews once dreamt of a life far from sweltering, sandy Florida, where she works on her father’s farm and cares for her stepmother’s many children. She thinks she has found love and freedom at last in the gentle and forgiving William Cavendish, a man who seems her peer in every way, but when a dark secret and a past lover intertwine to threaten their relationship, will their love, and her life, be ruined forever?

The next two dances were waltzes. I sat the first out, fanning myself and drinking a glass of punch Ida had abandoned in order to dance with Arnold, the Baptist minister’s handsome son. She hung on his arm, gazing at him, as he walked her back to the bench we’d been sharing.
A moment later, Mr. Cavendish was at my elbow. “I believe I’ve engaged you for the next waltz,” he said.
I gasped, inspecting my dance card. “Oh, dear! It seems you have. I always seem to forget these things.”
He smiled, holding out his hand. “No matter. Shall we?”
I felt Ida pushing me. “Go! It’s beginning!” she hissed.
A moment later, I was dancing with him again. The waltz was far more intimate than the quadrille. A woman was face to face with her partner, looking into his eyes, clasped in his arms. For the first time in some years, I felt the exhilaration of mutual attraction blended with physical contact. It was a heady sensation, and I basked in it.
Then I fainted.
One moment, I was whirling around in blissful oblivion, and the next I was hot all over, watching the room fade into darkness. I came to on the balcony. Someone was slapping my wrists and cheeks, and Mr. Cavendish was fanning me. I tried to sit up.
“Stay put!” admonished Letty Hamilton in her nasal tones. She was the one slapping me. “I fainted an hour ago, and believe me, you’ll feel better if you lie still in the cool air.”
I closed my eyes and obeyed her. It was rather nice to lie there in the dark with the breeze blowing my hair away from my sweaty neck, if I didn’t dwell on the fact that I’d fainted in front of a man I found appealing. Eventually, Mr. Cavendish brought me a glass of water, and Letty found the decency to give me some air and move to the other side of the balcony with the gentleman she’d been speaking to when I was brought out.
“I’m afraid I’ve humiliated myself,” I said.
“Nonsense. You’re not the first woman to faint tonight. Nor the first to faint in my arms.”
“How debonair.”
He smiled. “I’m afraid my charm has nothing to do with it. Women compress their lungs with whalebone and prance around a crowded room all night in heavy silks, then wonder why they drop like flies.”
“However did I get out here?”
“I carried you, of course.”

Buy Link for A WOMAN SO BOLD:

Posted by Carly Jordynn at 9:12 PM