Cool Language and Slang from CAN'T STOP THE MUSIC By: C.D. Hersh

Slang has always played a part in the English language, no matter the era, and when you’re creating a period piece, the story wouldn’t be complete without the use of the slang of the time.
A lot of the hippie slang in our book, Can’t Stop the Music, had its origins in earlier eras.

Take the slang for money—in the 20s someone who was hip (a 20s and 60s word) might call money Cabbage. In the 30s the slang term morphed to Buck. In the 50s you would have said, Bread. By the time the slang reached the 60s the terms Bread and Dough were used interchangeable, and the term Buck was still around as well.
Various slang terms for policeman have also survived the decades, and are still being used today. Police officers have been called Flatfoot, Cop, Fuzz (1920); Copper (1930); Heat (1950); Fuzz, Cop, The Man (1960). The Man was probably the most popular term for police among the hippie generation.
Slang terms for women, especially attractive women, have abounded through the past decades. In the 20s women were often called Dames or Dish. In the 30s a pretty girl would be a Hot Tomato. Fifties terms for women included Chicks, Barn Burners, Dolls. In the 60s, the most commonly used slang was Chicks or Birds.
We’ve heard, and even used some of the above slang, although we don’t use it as freely as we might have in the 60s. Still, it was fun going back and searching out the slang of our youth. We were amazed how much of the groovy language from bygone eras has survived into present day.
We don’t want to seem like Abercrombies (20’s/know-it-alls) but we kinda blew our wigs (20s/became very excited) when our peepers (20s/eyes) landed on this groovy (60s/great) subject. We thought it would be blast (60s/ a lot of fun) if we clued you in (60s/informed you) on the story. And now, we’re going to make tracks (60s/leave) so you can read the outtasight (60s/fantastic) excerpt from our story, Can’t Stop the Music, set in Woodstock, where the music was hip (60s/very cool, far out (60s/wonderful) and righteous (something really great).

The Soul Mate Tree …
An ancient legend spanning eras, continents, and worlds. To some, it’s nothing more than a dream. To others, a pretty fairy tale handed down through the generations.
For those in critical need of their own happy ending, a gift.

For college senior and hippie wannabe Rosemary—Rose for short—a teaching job is within her grasp, but she wants more. She wants love, the kind of love that has bound her parents for so many years. When she’s dumped by her current boyfriend because her morals can’t bring her to give in to free love, she finds herself at Woodstock in the middle of the biggest free-love, music festival of the Sixties. Alone, again. Until a magical tree grants her wish and she finds the man of her dreams—and loses him before she really knows who he is.
Dakota meets the girl of his dreams at Woodstock, but a jealous wannabe girlfriend drives them apart before he can discover Rose’s last name and where she comes from. After he sees a disappearing tree that promises him true love, a frantic search to find Rose comes up empty-handed.
Magic and music brings them together at Woodstock in 1969. Misunderstandings tear them apart. Will two flower children find one another again, or live with missed opportunities?

Rosemary Sterling pulled her striped, gauzy maxi-skirt to her knees, stuck her sandaled feet out the rear passenger door opening of her friend Willow’s ’51 Woodie, and wiggled her toes. Sweat rolled down the center of her back. Not even a tiny breeze tickled the air on the crowded, one-lane road to the Woodstock Music Festival.
The heat radiating from the string of cars stretching in front and in back of her only added to the hot, summer air. Most of the vehicles’ occupants lounged on the hoods, the dirt road, or sat cross-legged on the ground, smoking pot or playing their guitars, their psychedelic clothing bright spots of neon color against the deep-green grass.
“How much longer before we find out what the holdup is?” she called as she exited the steamy vehicle.
Shielding her eyes, Willow straightened from her slouched position against the side of the car and peered between the row of stopped cars. “I see Bodi coming now. Maybe he’s found out what’s causing the traffic jam.”
“Aren’t you burning up?” Rose flapped the bottom of her cotton peasant blouse to stave off the hot, humid air. When the motion didn’t cool the sweat running between her breasts, she jammed the fabric under her boobs, swiping at the damp flesh. Then she clambered onto the sun-scorched hood, careful to tuck her skirt under her bare legs.
“I shouldn’t have let you talk me into burning my bra last night.” She glanced at Willow, envying her pert A-cups. You couldn’t tell Willow’s girls were unchained. “Even that thin layer would have kept the sweat off. Bra burning might be the rage right now, and that’s fine for someone built like you. For C-cups or bigger, loose boobs are a drag. Pun intended.”
Willow laughed. “You’ll get used to it. Once you do, you’ll see the advantage.”
So far the only thing her hippie friend introduced her to that she’d embraced was the shortened flower name Willow had given her.
“Rosemary’s the name of your grandmother, not a flower child. I’m renaming you Rose,” Willow had said.
Jake and Starr, the other two in their group, came around the side of the Woodie. Jake’s tangled curls looked as if he’d just rolled out of bed. Grass stuck out of Starr’s hair in a green corona. She doubted they’d been doing anything that merited halos.
Frowning, she slid off the hood, motioned Starr over, and began picking grass from her braids. “I hope you two weren’t cavorting in poison ivy. I don’t think we packed any anti-itch lotion.”
“You should cavort sometime, Rose.” Starr gave her a friendly shove. “You need to loosen up, girl. Partake of free love.”
She couldn’t get used to free love either. “No thanks.”

Can’t Stop the Music is available at Amazon  https://www.amzn.com/B01N9RDN96

Can’t Stop the Music is book number 2 in the Soul Mate Tree series. A new book centered around the legend of the Soul Mate Tree will be released every month through January 2018. To learn more about the collection check out Amazon. 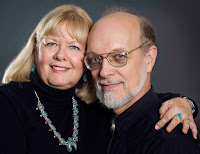 C.D. Hersh–Two hearts creating everlasting love stories.
Putting words and stories on paper is second nature to co-authors C.D. Hersh. They’ve written separately since they were teenagers and discovered their unique, collaborative abilities in the mid-90s. As high school sweethearts and husband and wife, Catherine and Donald believe in true love and happily ever after.

The books of their paranormal romance series entitled The Turning Stone Chronicles are available on Amazon. They also have a short Christmas story, Kissing Santa, in a Christmas anthology titled Sizzle in the Snow: Soul Mate Christmas Collection, with seven other authors.

They are looking forward to many years of co-authoring and book sales, and a lifetime of happily-ever-after endings on the page and in real life.