Raven lives on Gull Island, an island owned by the Coast Guard. She prefers the solitude of the island until a famed photographer, Sebastian, arrives to take pictures of it in all its untamed glory. Despite wanting to be alone, Raven finds herself attracted to Sebastian until three treasure hunters arrive and hold them hostage while they search for a missing treasure from a sunken ship. In order to protect Raven, Sebastian, with the help of the island ghost, team up in a supernatural way to help Raven be rid of the criminals that have invaded her space.

Raven and Sebastian go to visit his home town where Raven's own secret past is revealed and she learns to accept the secret of Sebastian's life as well.

This book, as stated earlier, grabbed me from the get-go. I like how this couple had to overcome not only the obstacles of the three criminals, but also their pasts. When they realize they love each other enough to overcome all that, you enter into a beautiful love story with just enough suspense to leave you wanting more. The book is well-written and Ryan weaves a wonderful tale filled with love, magic, and suspense. I highly recommend this book to anyone looking for a quick read.

ARE YOU INTRIGUED? WANT TO KNOW MORE? READ ON FOR THE BLURB AND EXCERPT FROM CHASING THE PAINTED SKIES.


Raven Koynes is a woman in hiding. Years ago she escaped to remote Gull Island Light Station, nestled far away in Lake Superior. She has carved out a life of peace and solitude for herself. Until famed nature photographer Sebastian Knight arrives--in the  height of a nor'easter storm--to document the beauty of Gull Island. Unsavory treasure hunters also blow in with the storm, determined to find missing cargo from a sunken ship. And they are positive Raven knows where it's stashed. A power outage from the storm traps everyone at her keeper's cottage, fellow prisoners of the storm.
Between her attraction to handsome Sebastian and the unwelcome advances and threats of the hunters, Raven is pushed to her limit. Help arrives in the form of a stray German Shepherd Dog, who takes an immediate protective interest in Raven. He becomes her constant shadow and listening ear as she sorts out her growing--and conflicting--feelings for Sebastian.
Meanwhile, Sebastian came to the island looking for treasure as well, in the form of photographs. While he isn't so sure about missing cargo, he only needs to look at Raven Koynes to know he's found his own valuable treasure. One he hopes he can hang on to if she learns about his mysterious secret.
Now that Madeline the resident ghost has found out, it's probably just a matter of time until Raven does too. And with the storm and power outage, no one is going anywhere any time soon. 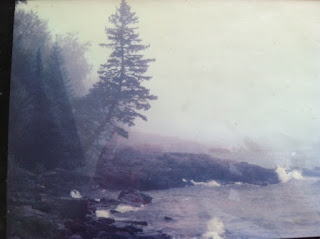 EXCERPT FROM CHASING THE PAINTED SKIES:
Did that include Sebastian? True, he had yet to take the photographs he came for. So was he willing to go without them? It didn’t sound like he had much choice. And did she really want him to go at all? Despite her talk with him earlier about liking to be alone on the island, his presence had awoken something inside her that dared to say otherwise. Something that dared her to deny its whispered suggestions that she might really be falling for him. She giggled. Too late, she’d already fallen for him and his bewitching green eyes and crooked smile and tender touch. That internal voice dared her to say she didn’t want him to stay, but as more than as a guest. Her heart leapt and beat fast. She wanted him to stay as her man.
“There she is! Up there!” Arthur’s angry bellow reached her.
Dropping the book, she scanned the rocky ground. Standing below, waving a short handled pick ax at her, Arthur beat his fist in the air. Dudley and Helen stood nearby, also holding out shovels. Cold fear crawled up her spine at the sight and a sweat broke out on her forehead. Pulse racing, she realized she was trapped at the top with no way down but through them.
“She’s gonna show us that treasure and right now! Let’s go get her!” Arthur barked, waving his ax like a club. “I want that black-haired witch!”
Oh Lord, where was Sebastian? Standing up, she considered her options. There was no lock on the light tower. She could never run fast enough to outdistance them all. Trapped like a rat, she could only wait. Could she maybe push them over the railing? Would she have the guts to? Shove another human over to their death? Her stomach flipped.
Beside her Madeline materialized, drawing her attention to the house. Trembling, Raven gripped the rail and looked over the edge. Could a ghost scare them away?
“Go after them, Madeline,” she stuttered. “You might be the only thing they fear.” Maybe.
Madeline raised an arm to point to the house once more, slowly fading.
Barking reached her ears as Salzburg broke from the trees at the corner of the house, racing for the trio, growling fiercely.
Her hand pressed to her mouth in horror, Raven watched as Salzburg leapt through the air, aiming for Arthur.
Connecting with his arm, he swung his weight, dragging the man’s arm, pulling yells of pain from him. Finally Arthur
shook the dog off and Salzburg went rolling across the ground. 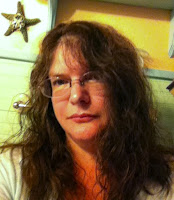 Ryan Jo Summers is a North Carolina author who specializes in writing romances with a twist. Love stories blended with inspirational, paranormal, suspense or time travel--or several at once. She also writes non-fiction for regional periodicals. Ryan's dad is a songwriter and his aunt wrote poetry so she claims she came by her writing skill honestly. Apparently it's in the genes.
Her hobbies include bird-watching, houseplants (50 ish and growing), poetry and yard work. She loves to gather with friends, hike in the forest with her dog, paint ceramics and canvas and work on wiggly word find puzzles. She lives in a 1920 cottage with a menagerie of pets. Living in the mountains, she dreams of the shore and frequently uses the water as scenes for her stories.

Posted by Carly Jordynn at 9:10 PM