Today I am interviewing Kat Shaw. Kat is the leading character in MIDNIGHT ANGEL by Tracey A. Wood. Keep reading after Kat's interview to learn more about the book and its author.


After almost losing her life in a vicious, bloody attack. Kat Shaw, a thirty-something, divorcee, discovers that there are such things as monsters. And the predator who attacked her is not human. She starts to develop unusual skills which have murderous consequences. And is an unwilling witness to multiple, brutal murders, seen through the eyes a killer. Thrown into a battle of Good vs. Evil, she falls in love with two men who are not what they seem. While her attacker stalks her and continues to murder the innocent. She has to find the inner strength to take on and fight the demons from hell. To protect her family and friends while also trying to save her own life.

How long have you been selling and letting houses?
I have been an estate agent for around eight years.

Why did you buy, Crimson Cottage?
Oh, it was the right price. The work it needs doing, won’t cost too much. It’s far enough from London that it will make a nice weekend retreat. And the views are amazing.

Kat, my next question is about Jonathan. How did you meet?
Jonathan is a sweetie. We first met in school. We became friends some time later. He was bullied by a girl named Donna and her friends, at school. He’s is gay, and they decided to call him names and shout horrible comments after him. It went on for months, and poor Jonathan never retaliated. It escalated, and she started to bang into him when they passed in the hallway. She tripped him up when he walked past her. I bit my lip. I didn’t think he would like it if I said anything. This went on for a few weeks. She wasn’t picking on just him, it was anyone she thought she could intimidate. The day everything came to a head was the day that she had been called into the headmaster’s office. She had dragged a younger girl into the toilet and flushed her head in the toilet. Well her and her cronies. She was livid after the headmaster had torn a strip out of her in his office. She had been put on probation and threatened with stepping out of line one more time, and she would be excluded from school.
When she came out of his office, she was practically breathing fire. Jonathan had been laughing at something one of his friends had said. Donna thought he was laughing at her so she barged up to him and punched him in the face. His nose exploded, and blood flew everywhere.

How awful, poor Jonathan. What happened?
Well, I saw red, and I don’t mean because of the blood. I flew at Donna and took her down. Her so called friends stood watching. She screamed as I reigned punches at her face. She had grabbed my hair, as she tried to get me off. The next thing, I was flying through the air, backward. The teachers had seen what had gone on, and Jonathan had been crying for me to stop. But she got what was coming to her.  I got into trouble, but Jonathan never had any more problems from Donna. She had been excluded.
Jonathan and I, have been friends ever since.

Okay, you were very young when you had David. Who was his father? Was it your ex-husband?
Yes, I was a teenager when I had David, 15 years old. No, my ex-wasn't Davids father. I fell pregnant with David, and the father was my first love, my soul mate. He was a couple of months older than me. Tony was Davids father. He was caring, kind, gorgeous and fearless. He was passionate, strong and we loved each other. He died in a motorbike accident. He was a passenger, and the driver lost control on a wet road. They were both killed, instantly. I never loved anyone like I loved Tony.

This is the last and final question. What are you pet hates?
Oooh, I have a few but the main onse. Firstly, I hate being late and people who are late. It wastes so much time. Secondly, I don’t like high heels. They look lovely on other people but how do they walk in them? Anthying above one and a half inches and I fall off them. Oh tried them. I had this really nice black, peep toe heels. I was out at a night club struting my stuff. There was this georgious guy watching me. You now, smiling and flirting from a distance. I was with a girl friend dancing away, showing off and the next minut, I was flying across the floor. Guess where I landed. Yeah, you got it. Right at the feet of the guy I was eyeing up. I was in agony, lying on the floor. My ankle throbbing. My goodness, I was so embarrassed. I couldn’t get out of there quick enough.

Thank you for answering my questions.

I had set my alarm clock so I could get up early in the
morning, to head off to the cottage. Turning off the light and
lying down, I snuggled under the covers.

I was just nodding off when I heard ringing. I hit the
alarm clock, but the noise didn’t stop. Blinking, it dawned on
me that it wasn’t the clock, it was the phone. I jumped up and
answered it before the machine did.

“Kat?” the voice on the other end said.

“Yes?” I didn’t recognize the voice. Who would be calling
at this time of night?

“I was wondering, do you want to go out on Monday
evening?”

He went quiet, then asked, “Why not?”

As the words left my mouth, I realized I shouldn’t have
said them. I should have thought of something better. I didn’t
know what else to say.

“Oh, so that’s it? You don’t want to see me again, do
you?” I could hear the attitude in his voice.

“No. I think we should call it a day.” The phone went
quiet.

“That’s about right, you bitch!”

“You lead me on and then dump me, you whore.”

I couldn’t believe what I was hearing. My God, where was
the caring man from earlier? The one who had given me his
jacket.

I slammed the phone down. As I did, I could hear him
shouting and swearing at me. I couldn’t believe my ears.
Wow! I certainly had a narrow escape with him. I’m glad I
didn’t tell him in person.

I was angry, annoyed that I hadn’t retaliated.
He was so nice. Who would have thought he could turn so
nasty? Just wait until I get my hands on Jonathan. I’ll wring
his bloody neck. What was he thinking, introducing me to a
lunatic?

I made sure all the windows and doors were locked and
finally went to bed.

I dreamt about the man on the rock. It was different this
time.

The nameless vision of masculine beauty watched the water
bubble and swirl as it flowed past him. He turned his head in
my direction and smiled. There was something wrong with his
eyes. They were not the beautiful blue eyes I loved so much.
They were yellow! He glanced back at the stream and my gaze
followed his. I looked back to where he stood and took a step
forward. He wasn’t there! My heart sank.
Where had he gone?

I scanned the area but he was nowhere to be seen. I heard
a noise above me and saw a large bird flying high in the sky.
It swooped toward the stream and took off into the woods.
Where did he go? He was there one minute and gone the next. I
had just plucked the courage up to speak to him and he’d
disappeared. 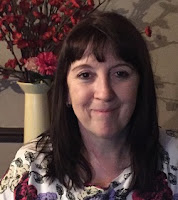 BIOGRAPHY OF TRACEY A. WOOD:

Tracey A Wood has lives in Staffordshire, in the United Kingdom. She has been married for over thirty years and has two children. One of her boy’s lives at home due to being disable the other has flown the coup. She has three cats that are her babies, and she talks to them all of the time. Funny thing is they don’t answer back.
She loves snowboarding, skiing, jumping out of aeroplanes and bungee jumping. Well, that is when other people are doing them. She prefers to have her nose in a book or writing one. She also loves to people watch which her husband is always telling her to stop doing. She has a job that she enjoys and works full time. Although if she won the lottery, that might change! She has also got a very good imagination.
In 2014, she decided to take the bull by the horns and send her manuscript to Soul Mate Publishing. She feels so privileged to have her book published, as this is the first one that she has written. It has made her dream of being a published author a reality. Life really is too short to wait, you’ve got to go for it. She is still working full time and is also working on another book in her limited spare time.  Her favourite saying is ‘Everything happens for a reason’ which she also believes is true.
Her books are fast paced and centred on a female lead who finds an inner strength after being thrown into situations that are beyond her control.
BUY LINKS:
US link: https://goo.gl/3Lk91d
UK link: https://goo.gl/e7L7DV

Posted by Carly Jordynn at 8:14 PM