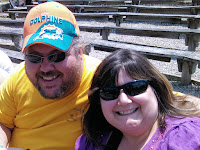 Today, Carly's View welcomes new writer, Chadwick V. Duncan, author of DEAD FAITH. I have been friends with Chadwick for many many years. He is a creative, humorous, down to earth guy. Chad has been a huge supporter of me and my choice to be a writer. It's now my turn to return the favor.

The picture to the left was taken a few years ago when Chadwick and I met up at the ICHTHUS Christian Music Festival. I write lyrics for a band and they were performing at the festival.

Read Chadwick's post below on what it means to be "Creative."

What is a “Creative”?

I started hearing this term a couple years ago usually in reference to artists, and usually ones that are otherwise in the business world.  The graphic artist on staff at a magazine or advertising agency, someone who does the animation in a movie, but I’ve also heard it used directly towards people who make their living in the arts such as a painter or writer (are writer’s artist?  That’s a whole other blog!)

If you look up the noun “Creative” online you find the definition:
“a person who is creative, typically in a professional context.”
But is that really a big enough definition? When I hear the term used it really seems to leave out a lot of people.  I’ve seen people take a boring spreadsheet program like Excel and figure out how to automate complicated tasks with it that no one else had thought of yet.  It wasn’t something in a book or it wasn’t online.  They had to get creative.  But okay, maybe they don’t make their whole living off of that.   Now me for example, I have an art degree, but I am (usually) in non-profit management.  I’ve been in meetings with state agencies and other non-profits and managed to come up with solutions to problems that everyone there thought was unsolvable.  Coming up with creative solutions to problems is part of the job in this kind of work.  Isn’t that “Creative”?  But maybe my degree muddies the water in that example.

My oldest brother was as far as you can possibly be from a creative field, at least on the surface.  He worked with computers.  He would tell me, you just put the info in, and info comes out, the computer can only do what you tell it, very black and white.  He had a Computer Science degree, again, not very artsy.  He wore a suit and worked for a military contractor.  But creativity was the mainstay of his job.  Initially he was hired to keep other hackers out of the computers, to out think them.  Later his job was  to get the computers back up when they went down, or else some piece of defense equipment wouldn’t do its job if the enemy decided at that very moment to attack.  So there he was, figuring out how to put everything back together again when no one else could.  And while this all took creativity, he told me a story that I think exemplifies the question of “What is creative?”

While working at the defense contract company, he had been tasked with leading a team tasked to build a vehicle that could deliver packages based on internal maps and coordinates.  Again, while maybe not “ART” he was being asked to be creative and create something.  He told me that initially he and his team had laid out a giant circuit board on a sheet of plywood and once they got it working, they got it down to less than half of that and finally they had a little cart that they could tell where in the building to take a package and it would go there with the package in a little mounted basket.  Then one day he came into his office and found out that his project had been classified, and all the information on it had been removed from his computer.  Then flash forward a few years to when the U.S. bombed Baghdad the first time and he see those missiles on CNN go between and around buildings in downtown Baghdad to hit their target, and he knew that this was his design from years earlier.

Okay, you probably didn’t think this blog would get this “heavy”.  But here’s the obvious point.  He was a computer science nerd by his own admission, but created something no one had ever seen before.  And let me turn a corner here, because the expression of “art imitating life” shows itself to be true over and over.  Recently I was sitting down watching a TV drama featuring a bunch of computer science guys helping with police investigations, not one of those investigative shows, but the purely fictional cop shows.  During the episode, one of the computer guys has a dramatic moment when he reveals why he wants to be careful with how he uses his abilities and tells this very same story my brother told me well over a decade earlier.  My brother passed away many years ago so this means that someone on my brother’s team is now a consultant on this television show, or maybe even a writer… using the creative exploits of my brother, and I’m sure his or her own career, to be a “Creative”.

So what is a “Creative”?  Should the term “Creative” be expanded in our everyday vocabulary to include people who don’t produce art but, as per the definition, are creative in a professional context?  I think so, but I also think there is very little chance of it catching on.  But I think it is worth realizing that we are surrounded by creative people in all walks of life, and you never know when the person at the cubicle next to you is another Rembrandt… of spread sheets.

Read on for the Prelude to DEAD FAITH:

Prelude
Time: Tomorrow night, 11:59 P.M.
Location: Covington, Kentucky
The darkness of the underground labyrinth was barely broken by the light thrown off by the five torches sitting in their sconces on the wall.  The  room itself was cut out of the living rock long ago and was damp and cold due to being only yards away from the mighty Ohio River, just inches above water level.  Many of the houses in this old and upper class neighborhood are known for their hidden passages and tunnels that were part of the Underground Railroad.  But some of the passages had been in existence long before the abolition of slavery and had a much more nefarious purpose that had nothing to do with freedom or helping ones fellow man.
While thousands had gathered across the river in Cincinnati to watch the home team take-on their big rival from Cleveland, thirteen men  gathered in the darkness of the cavern for their own dark reasons.  Despite the fact that they were one person short, they  began an ancient ritual to bring their dead leader back to life.  As always with this group, there had been arguments at the beginning, their leader had been dead for months, and his decaying body, lying on the floor between them, didn't seem as if it could ever be whole again.  Many were nervous that one of their members had not shown up, but had finally decided, for the task at hand, thirteen was a good number.  The appropriate sacrifices were made, the right amount of self flagellation performed.  And now, at one minute until midnight, the thirteen men were chanting in unison in a language that hadn't been heard in over two thousand years.  Their words demanded  the veil between life and death be torn asunder so their leader could come back to them.

Sounds like an interesting book doesn't it? Chadwick gave me the honor of reading the complete novel. I love that it is set in the area we all once lived. I have to admit, I'm not much of a Zombie fan, but was surprised to find myself caught up in the story immediately. Part of that may be that I was familiar with the setting already, that added an element of "ha, ha, I know where he is talking about or who he was talking about."  The book is action packed and definitely has some plot twists I didn't see coming. There is no doubt in my mind that we will be seeing books written by Chadwick in the near future.

Chadwick Duncan is a Christian, husband, and father.  He left art to work with Children and related causes and been everything from Executive Director to part time diaper changer (that might not have been the actual title).  He recently finished his first novel, Dead Faith, which he hopes will see the light of day soon.

Posted by Carly Jordynn at 4:22 PM