Everyone welcome Angela Archer to Carly's View. Angela is here to celebrate the release of her newest book, AS THE LIQUOR FLOWS, from the Long Valley Press.


With the untimely death of her parents and the loss of their only income, Evelyn, and her brother, Frank flee to a make-shift hovel built in Central Park.

After Frank mysteriously goes missing, bare cupboards force Evelyn to seek employment anywhere she can find work---even if that means working at a burlesque theater.

Catching the attention of Don Vincent Giovanni, a Kingpin in the New York mafia, Evelyn discovers that Frank is serving time in prison for running hooch. And, that he owes Vincent a lot of money. To pay off her brother's debt, Evenly falls prey to the world of mobsters and bootlegging.

Soon, Evelyn finds herself drawn to Max Catalano, Vincent's Consigliere. Unknown to her, however, Max is an undercover detective for the Bureau of Investigations. His assignment is to bring Don Giovanni to justice.
Between running  of alcohol all over the city of New York and trying to free her brother, Evelyn entangles herself, not only in a web of lies, but in the middle of the New York mafia crime wars. 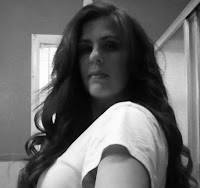 BIO:  Angela lives on a ranch with her husband, two daughters, and many farm animals. She was born and raised in Nevada, and grew up riding and showing horses from hunter jumper, English equitation, western pleasure, trail, and halter. While she doesn't show anymore, she still loves to trail ride her paint horse, Honky. In December of 2007, she and her husband moved to Oklahoma.

BUY LINK FOR AS THE LIQUOR FLOWS:

Posted by Carly Jordynn at 9:33 PM