Carly's View would like to welcome Kim Loraine, author of THE GOLDEN BEACH NOVELS. Read on to learn more about  RENOVATION,book two in the series. Leave a comment on the blog and I will conduct a random draw to win a PDF copy of Kim's book, RENOVATION.


Donovan Miller braced his arms on the side of the pool as he pushed himself out of the water. His limbs trembled slightly from exertion. He reached for his towel and caught sight of the swimmer a few lanes away. She was tiny. Her body moved smoothly through the water, mesmerizing him as she rotated back and forth. He could tell she was an experienced swimmer by the consistency in her strokes. As he toweled off, he admired the curves of her body. Alarm bells rang in his head when he realized she was rapidly approaching the wall and showed no sign of slowing.

"Hey! Hey! Watch out!" he shouted as he ran toward her lane, hoping desperately to intercept her.
With a dim thud, her head hit the side of the pool. He watched as her eyes rolled back and she sank under the water.
"Shit! Shit!"
Jumping into the swimmer's lane, he pulled her to the surface, attempting to immobilize her neck as much as possible. He assessed her pulse and checked to make sure her airway wasn't compromised.
"Call an ambulance," he barked at the dumbstruck lifeguards headed in their direction.
She floated in his arms, eyes closed, bleeding. He took a moment to feel thankful he'd seen the effects of blood mixed with water before. Even a small amount of blood can look like a murder scene when water is added. He held her while they waited for the ambulance. He stroked her hair and checked her pulse again, disconcerted by the feeling of her soft skin under his fingers. Her eyes fluttered open, affording him a concerned glance before she winced in pain.
"What happened?" Her voice was thin and raspy.
"Shh, don't try to move, sweetheart. You slammed into that wall pretty hard."
"I . . . mmm . . . lost my count."
"It's gonna be okay."
She frowned, eyebrows pulling together. "Can I get up now?"
"There's an ambulance on the way. They'll be here in a minute. We need to wait to move you. I want to get you on a spine board and in a neck brace." He smiled and locked eyes with her. "What's your name, sweetheart?"
"Valerie. Valerie Peters." Her face pulled into an adorable frown again. "Don't call me sweetheart. I don't even know you."

EXCERPT #2 FROM RENOVATION:
The drive was all of ten minutes.
Ten . . . excruciatingly slow . . . minutes.
Valerie needed Donovan. She needed to be surrounded by him; his taste, his scent, the feel of his skin on hers. At every stoplight, she let out a slight annoyed breath.
His hand never left her leg.
His thumb traced small circles on the outside of her knee.
His fingers played up and down her thigh, driving her wild.
"Once we do this, sweetheart, it's just you and me. No one else." His voice was rough as he parked in front of his building.
"No one else."
They walked hand in hand.
Ten steps to the elevator.
Not speaking.
Both staring straight ahead.
As the doors closed, flashes of the last time they were in this enclosure together ran through her mind. Heat crept up her body, causing her to squirm ever so slightly.
"I'm trying like hell to control myself, sweetheart. You keep squirming like that and I'll have you up against this elevator in less than a second."
Her heart jumped into her throat and she swallowed. He released her hand and stepped away from her, leaning casually against the elevator wall. As she turned her eyes to him, the sexual energy crackled between them and she prayed the doors would open soon. She watched as his tongue darted out to wet his lips and couldn't help but squirm against the wave of lust that hit her.
"I warned you," he said as he crossed the distance to her.
His hands captured her face and he crushed his lips to hers as the doors to the stupid elevator finally opened.
"Oh," came a soft cry from the elderly woman who stood in the hall.
Donovan and Valerie split apart. A wave of humiliation coursed through her for her obvious wantonness.
"Mrs. Mackintosh." Donovan tipped his head at his neighbor, his ears tinged pink.
"Donovan."
As he pulled Valerie down the hall, she swore she heard Mrs. Mackintosh giggling.
At the click of the apartment door closing, he had his shirt off and she was up against the wall. His fevered kisses trailed along her neck and the exposed skin of her chest while he worked at the buttons of her silky shirt. The roughness of his fingers sent tingles through her as he freed her from the constraints of her office attire.
He looked down her body in appreciation. "Bare legs?"
"I don't like pantyhose." She shrugged. Standing there in front of him in just a bra and matching lace underwear, she should have felt exposed. Instead, she felt empowered. His eyes burned with hunger. Never had a man made her feel this important. This desired.
He kissed his way down her body until he was kneeling in front of her.
"I don't think you understand how desperately I want you."
Her heart flipped. "Maybe you should show me."
He nipped at her hip with his teeth, lightly but with enough pressure for her to know he was serious. "Bed. Now." 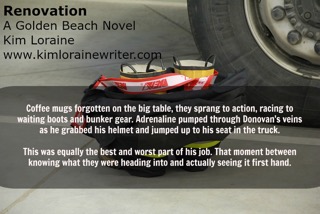