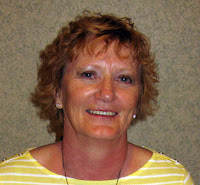 Today, I welcome author, Tina Susedik to Carly's View. Tina is the author of  RIDING FOR LOVE. Thank you for joining me, Tina. So, tell us a little about yourself.

TS:  First and foremost, I've been married for over 42 years, have two children, and five grandchildren. Being a grandmother is the best thing ever created. Besides being a published author, I've been a teacher, accountant, and various other things I can't even remember anymore. In my spare time, I volunteer at my grandchildren's school, love to bike, hike, camp, do photography, garden (flowers), and spend time with my family.

CJ:  You have written history books, romance, and children's books. Which was the most satisfying for you as an author to write?

TS:  That's a hard one to answer as I enjoy them all. I love, love, love doing research for my history books. I've learned so much about the military doing my military books. I've written history books about the area I live in. Talking to people about what life was like for their families in the past is fascinating. I wrote one of my children's books with my ten-year-old granddaughter and that was fun. I also enjoy reading the books to students when I speak at schools. It's a thrill to hear them laugh at the right places - not so thrilling when they laugh at what I consider the wrong places. But, children's humor is different than adults. With my romances, putting characters together, having them figure out how to stay together despite challenges and giving them a happy ending satisfies the romantic in me.

CJ:  Do you have a current work in progress? Can you tell us a little about it?

TS:  I currently have a book with my publisher tentatively titled: "Never With a Rich Man." It's a romantic mystery set in Wisconsin where a woman vows to never again marry a lying, cheating rich man, only to fall in love with a lying (not cheating) rich man. She doesn't know he's lied and that he's rich. The hero works undercover for the FBI and suspects she's involved in an antique smuggling ring because her ex is.

I have a Christmas short story coming out in November called: "Operation Santa." I had a blast writing that one and putting my poor hero through the ringers to win his wife back. I'm currently working on a sequel to another short story. This one is under my pen name.

CJ:  What is something you've always wanted to do and haven't done yet?

TS:  I would love to go up in a hot air balloon. They simply fascinate me. To move across the sky at a slow, peaceful pace and view the earth below me would be a dream come true.

CJ:  Have you visited any other countries?

TS:When my son was a sophomore in high school, I chaperoned a trip to Europe. We visited England, France, Germany, and Switzerland in ten days. It was hectic and keeping track of teenagers who thought they could anywhere they wanted, was a challenge. Germany and Switzerland were beautiful and felt like I'd come home. I don't know if that's because that's where all my ancestors came from and it's in my blood, or if the scenery was very much like northern Wisconsin where I live. I've also been to Puerto Rico, which really isn't a foreign country. My husband and I and kids lived in Canada (Ontario) for thirteen months. We made many great friends with whom we still keep in contact. It doesn't seem like Canada is a foreign country until you live there. Rules, rules, rules for foreigners.

CJ:  What is your favorite character in any book from one of  your books and why?

TS:  I like Emma Labonte from South Seas Seduction, which is written under my pen name. She starts out as a meek and mild woman who was sheltered all her life. Through the story she grows. I was happy the day she became spunky and faced her fears.

CJ:  If you could become a character in any book, which one would it be and why?

TS:  Wow. Another tough questions. I love LaVyrle Spencer's books. I would say I would enjoy becoming any one of her female characters in her books. They are all strong women overcoming challenges, and finding love and happiness. She has a way of making her characters seem real.

CJ:  Who are your favorite authors?

TS:  There are so many, and the list keeps growing. I just mentioned LaVyrle Spencer. I also enjoy Nora Roberts, Victoria Alexander, Linda Lael Miller, Shayla Black, Lillian Jackson Braun, Jimmy Buffett, Jess Dee, Jude Deveraux (who I met at the Romantic Times Convention a few years ago. I had my picture taken with her and I acted like a crazed fan!), Janet Evanovich, Tess Gerritesen (I met her this past spring.), Ngaio Marsh, MaryJo Putney, Luanne Rice. I'm going to have to stop or the list would go on forever. I also like someone called Carly Jordynn.

CJ:   Are you a plotter or a panster when it comes to writing style?

TS:  I'm definitely a pantser. I get an idea for a book, jot it down. Come up with my characters, their names, and profiles, and start writing. Too many times the characters do what they want to do. I think if I had plotted the entire book first, I'd get too frustrated that they weren't listening to me. Sometimes they have better ideas than I do, anyway.

CJ: . In your opinion, what is the best book to movie adaptation?

TS:  I hate to say this, but I don't watch very many movies. When I do watch one, I'm surprised to find out later it was based on a book.

Read on to learn more about RIDING FOR LOVE. . .

Eve Dayton, owner of a riding ranch, rose above her childhood past and overcame the emotional damage her boyfriend caused when he married another woman. When someone starts sabotaging her ranch, Eve is desperate to find the culprit before she loses everything. Is it a coincidence or is the return of Denton Johanson tied to the mystery?

Divorced Denton Johanson returns to his hometown to help convict the embezzling controller of the family business. When he runs into Eve, he realizes his feelings for her are still strong enough to try and win her back. His fear of horses won’t get in the way of his goal and decides the only way to be near her is to take riding lessons from her. Can he convince her that his love is real and he is not behind the mystery surrounding the ranch?

Eve Dayton's former boyfriend returns to town just as problems start arising at her horse riding ranch. Can she believe his declaration to be part of her life again? Will she overcome the suspicion that he is part of the problem and accept his help in catching the culprits? Find out how Denton Johanson triumphs over his fears to win back her love.

Tina lives in Wisconsin with her husband of forty-two years. She adores her five grandchildren and loves to camp, hike, bike, scrapbook and, of course, read, read, read.

All I Want for Christmas is a Soul Mate: http://www.amazon.com/All-I-Want-Christmas-Soulmate-ebook/dp/B00GH2I458/