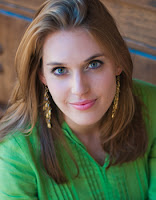 Carly's View welcomes new author Abby Reed. Abby  writes young adult science fiction and fantasy novels that ask what if. She has a degree in English Writing and is drawn to characters with physical limitations due to her own neurological disorder called Chronic Migraine. Her debut novel, When Planets Fall, will be published in April 2017 by Soul Mate Publishing.

Abby lives in Colorado with her husband and two fluffy pups. If her hands aren’t on the keyboard, they are stained purple and blue with paint. Find her online at  www.abbyjreed.com.

What made you decide to become a writer?

Couple different reasons! As I grew up, stories became my way of processing my teenage angst. If I  ever had a problem, I’d always write and use the characters to work to a solution. It was basically free therapy. Ha. I knew writing would always be part of my life because of this.

I went to college for writing, then only ended up quitting my job due to a neurological disorder called Chronic Migraine. You can only watch so many episodes of Vampire Diaries in a row, so I committed to actually putting my degree to use. A couple books later, here I am!

 Who are some of your favorite authors and why?

Gosh. Tough question. I am a Sarah J. Maas devotee. Everything she writes is beautiful. I also love Susan Dennard’s Truthwitch series. The world building and characters…Lindsay Buroker—her characters never take the easy way out. Marissa Meyer is a fav. And I always buy everything from Rick Riordan and Stuart Gibbs too. The humor! The adventure!

 If you could be any character in any book, who would it be and why?

Kvothe from the KingKiller Chronicles. I played multiple instruments growing up, so I can relate to his passion for music. Plus, I’ve always had a soft spot for geniuses. My other character would be Hermione. She’s a part of the action and a hero without experiencing too much personal tragedy. I like the less-pain option.

I love to paint. I started doing watercolor portraiture but have moved through acrylic and am now spending a lot of time with mixed media landscape. I also love experimenting with painting migraines. Sounds weird, I know. But I enjoy trying to capture their disorientating feeling. I’ve also been getting into voice and composing. I like mixing sounds and the vibrations of the vocal chords inside my nasal cavity can be soothing during a migraine attack.

 Tell me about your first kiss? Was it magical or not so magical?

There were practically unicorns. My boyfriend took me to a luscious arboretum and proposed to me in the middle of a grove of pine trees. I got a diamond ring and my first kiss that day! (Plus, you know, a fiancé.)

 Do you have another career besides writing? If so, what is it?

I sell my art, but other than that, I actually don’t. Managing my illness takes up so much of my time, I don’t have energy for much else. Unless you count critiquing TV shows, drinking tea, and  taking baths. I am a pro-bath bomber.

 What’s an item on your bucket list that you haven’t done yet?

Someday I would love to try out for local theater. I’m one of the weird people who adore the spotlight. Even if I’m terrible at something, I’ll do it loud and proud. (Which is why you should never sit in on one of my voice lessons.) I’ve always wanted to try acting. I think it’d be similar to writing in terms of getting into character. Expect you’re telling the main story through your body, not the page.

 Tell us the best vacation you have ever been on.

My best vacations are the ones I do literally nothing. I sit. I listen to the mountain wind, to the waves, feel the sun on my cheeks, sleep and read. If I can incorporate nothing into any vacation, that trip is automatically the best.

 Where do you find the inspiration for your books?

I use a lot of fodder from my own life. I really love when characters still have to “save the world” but have to deal with their body in the process. That’s my everyday. Except that instead of taking down a government I’m trying to take down my jumping dogs.

I also understand the frustration of limitations mixed with the incongruent drive to keep going. I mean, I love The Hunger Games. But wouldn’t it be even cooler if Katniss had to deal with a disability while in the arena? That’s why so many of my characters deal with issues such as PTSD, migraines, or an amputation.

Just that it’s possible to live a fulfilling, satisfying life despite having a severe chronic illness or disability. It may mean you need to adjust your goals and your dreams, but it doesn’t mean you can’t be happy and less satisfied. It’s possible to find a way! Don’t give up!

BLURB FROM WHEN PLANET'S FALL:

Breaker's home is cleaved by blood. The three tribes on the planet Scarlatti, whose only difference is their blood color, each want to exploit Breaker's valley for themselves. The feudal tension has already claimed red-blood Breaker's leg and his older brother. Now all this 18-year old wants is to maintain the tenuous peace in order to keep his little 'stroid of a brother alive. Malani, a red-blood raised blue, is a kidnapped POW and only wants to return to her adoptive home with her dangerous blue secrets. Luka, a red-blood stewing for trouble, wants to right wrongs done to his family and bath his home in justice.

All three intersect when Breaker discovers a wrecked starship and is given seven days by the green-bloods to fix and hand it over as a weapon. Breaker must decide if aiding his enemies is worth the home he knows and his family's life. War is coming. And war respects no boundaries. And war leaves no survivors.

Abby's book will hit the shelves in April 2017. Tune back into Carly's View on April 15, 2017, for an excerpt and buy links for When Planet's Fall.

Posted by Carly Jordynn at 7:13 PM