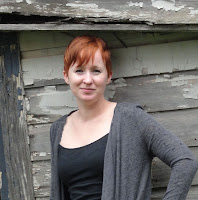 Carly's View would like to welcome RB Austin, author of FALLEN DARKNESS.


RB Austin enjoys torturing dogs (dressing her Cairn terrier in knitted sweaters and booties), embarrassing her daughter (singing in the car . . . at the top of her lungs . . . with the windows open . . . at a stop light), and indulging in the second deadliest sin (chocolate, Swedish fish, chocolate, sour patch watermelons, and chocolate).

This author’s love of the sun puts in her in the more-than-likely-not-a-vampire category, unless you’re referring to the bloodsuckers in her Trihune series, then all bets are off.

Feeling stalkerish? Visit her website, www.rbaustin.com, and learn where she hangs out on the Interwebs.

The war between Apollyon and the Trihune has begun.

Lucas scours the street in need of a fix. He captures his enemy instead of kills. Spins lies instead of truth. Seeks darkness instead of light. So close to the edge with no concern for the fall.

The map was foretold. Its key long lost.

Sent on a mission to find the key necessary to defeat Apollyon, Lucas meets Kate. Fiery, powerful, unable-to-touch-any-object Kate. As his feelings for her grow, the addiction inside him wanes.

Until he learns she is not meant for him.

Find the key. Find the way and triumph.

His future with Kate is bleak. The darkness, too hard to control. The key, still lost.

Can Lucas win the battle raging inside his body in order to win the war rising on the streets?

For the first time, Kate allowed the fear she’d felt in the priest’s house to trickle in. She’d kept it under wraps after making her decision to work for him.

Her mind flashed to the high metal gate closing behind them. She hadn’t heard the clank of metal as it latched, but, now, in her head, she did.

Trapped. There was no way to climb the gate. It was too high. The surrounding trees were tall, but not close enough to use to get out. She hadn’t seen a fence on the drive up to the house, but she’d known it was there. No one installed an entrance like that unless it connected three other sides.

Always have a way out. It was the first part of her plan. More often than not she needed that escape.

Kate jumped when Lucas touched her arm, just above her gloved hand. She jerked back. Heard a loud, quick rasp fill the car and realized it was her. She was breathing heavy. She tried to slow it. To quiet it.

Her gaze latched onto his blue one’s. She’d trusted him. She never trusted anyone. But for some reason she’d trusted him. Had willingly got into his car. Allowed him to drive her across the country.

She was the kid taking candy from the dirty, perverted old man. For her own idiocy, Kate deserved whatever happened to her. She was street smart. Proud of it, ‘cause she never made it through high school.

She was a fool. And this place would be her downfall. She’d never get out. Never see Stacy again.

It was hard to breathe. The frickin’ heat was finally off but it was so hot. She had to get out.

She grappled for the door handle. Spots danced in front of her eyes. Panic swarmed in full force.

Noises sounded from her left. Lucas was leaving the car.

What would happen to her? They could do anything to her. She’d be helpless.

Her door opened and she’d have fallen out if Lucas hadn’t caught her by the shoulders. The urge to pull away from his touch was strong, but she’d fall flat on her face if she did. Cold air blasted her. She lifted her head. Allowed it to push back the spots. Clear her vision. She sat in her seat sideways. Lucas’s hands were still on her shoulders supporting her as she half leaned out of the car. She sucked in gulps of air. Her gaze sought his through no will of her own and stayed.

Kate didn’t know how long she sat. Lucas never once shifted or acted like his arms were getting tired. Slowly her breath evened out. She braced her arms on the door jam and slowly leaned back against the seat.

She wasn’t going to pass out now, so that was better. But the fear was still there. She was still trapped.

Her gaze darted around the grounds, searching the perimeter. Hurry. Find a way out.

Again, her eyes found his.

“What can I do to prove you’ll be safe here? No one will hurt you.”

She made her own safety. Didn’t rely on others to provide it for her. She jumped from the car, making him back up. Spots danced crazily in front of her eyes. Maybe she was still going to pass out? Kate reached out, clutched something. She would not faint. Her gaze latched onto Lucas’s and she used him as a focal point to steady her breaths. When the dizziness passed and her vision had cleared she realized her hand was in his, squeezing it tight. She dropped it quickly. Leaned back against the door.

“Come on,” he said softly. “Let me show you. No one will harm you in any way. If you’re still afraid afterward I’ll take you anywhere you want to go.”

She stiffened. “I’m not afraid.” Was that her voice, weak and high-pitched? She pushed away from the door, making herself stand on her own. Then had to lock her knees to keep from falling back against the car.

His lips twitched like he was going to smile, but he didn’t. He just offered his arm, as if she were some damsel in distress and he was the dashing hero ready to save the day.

She ignored his still raised hand and walked past, keeping her arm out near the SUV in case she had to catch herself. For the moment, the dizziness had fled. The cold wind battering her cheeks helped. From the number of trees surrounding the place, she’d thought it would act as a buffer to the elements, but it seemed to have the opposite effect. Lucas stopped at the back of the SUV and retrieved his bag.

Her heart pounded faster as they neared the door.

Calm down. She could get out of anything. She wasn’t helpless. Would never be that way again. This was a job. Just a place to make money. Nothing more.

So why did it feel like if she walked into the mansion, she’d never leave?

The doors opened as they headed up the steps. Kate jerked, falling back two stairs until Lucas’s arm came around her. It was comforting. She moved to the side, breaking contact. Her heart slowed at the old man wearing a suit standing in the doorway. She could definitely take him. If it came to it.

“Welcome back, adohn,” he said and bowed.

Kate’s gaze shifted from the old guy to Lucas. What the hell?
Posted by Carly Jordynn at 1:25 PM