Character Interview with Katelyn Medena from SECRETS FROM MYSELF by: Christine Hart

Character Interview with Katelyn Medena from SECRETS FROM MYSELF

Today we’re introducing Katelyn Medena, protagonist and narrator of the upcoming middle grade novel Secrets from Myself. She’s a girl from the BC Interior, Nelson to be exact in the Kootenays. But we’re talking to her at her group home in Vancouver’s Kitsilano neighbourhood.

CJ: Thanks for talking with us today Katelyn. Would you like to tell us why you’re in Kits at the moment?
KM: I’m happy to talk to you, but don’t tell my counselor or my doctor. Actually psychiatrist is the right word. That’s actually why I’m stuck in Kits at Arbutus House. I ran away from home and my mom thinks there’s something wrong with my brain. The doc thinks so too because I’m ‘hearing voices’ and making up stories about past lives.

CJ: That sounds pretty serious. Are you sure your mom and doctor aren’t onto something?
KM: If you’d had the dreams I’ve had, and seen a stranger’s writing in your own diary, you might sound crazy too. But I’m okay with it. I’m used to being a bit of a loner, especially since my friend Bryce had to move here to Vancouver. The only silver lining of being stuck in a group home is that I get to see Bryce again, even if it’s only temporary.

CJ: I don’t think you’re crazy Katelyn. I never use that word. But why don’t you tell us a bit more about your friend Bryce?
KM: He’s my best friend. And if I’m being totally honest, I’ve had a crush on him since fourth grade. It’s horrible. I wish I didn’t feel that way, because I’m pretty sure he’s not into me. I don’t think he’s into anyone though, because his dad is super strict and Bryce likes to focus on school to keep his dad happy. Actually his dad kind of scares me. But Bryce is nothing like his father. He’s sweet and thoughtful and very smart.

CJ: Bryce sounds great, but I’d like to hear a little more about those past lives you mentioned. What’s going on there?
KM: It’s just one girl really. I had strange dreams when I was a little girl, and I know I spooked Mom a couple of times talking about people we didn’t know and places I’d never been. But now it’s just Akasha. Always Akasha. I have dreams from her point of view. I’ve found her writing in my diary, sometimes even in Hindi. She lived in India in the early 1900s and she stowed away on a boat called the Komagata Maru so she could sneak into Canada. Her boyfriend hid her in a steamer trunk, but the trunk was thrown overboard and they got separated. I’m still trying to figure out what happened to her.


CJ: That certainly is a pretty wild story, but that’s all the time we have today. I won’t say I don’t believe you, but I truly hope you find the answers you’re looking for. Good luck Katelyn! 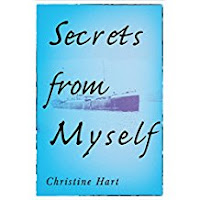 BLURB FROM SECRETS FROM MYSELF:

Eleven-year-old Katelyn has always had voices and visions. She's long suspected she was hearing from past lives. But when she runs away from home and hides out with an old friend in Vancouver, things become more real. She even finds herself writing the words of someone else in a diary: the words of someone whose fate was deeply impacted by the Komagata Maru Incident. As Katelyn learns more about the Komagata Maru and the person communicating with her, she realizes that she has a task to fulfill that will correct a wrong from the past.

I pull a fresh pen out of my backpack and sit cross-legged on the end of the bed with my diary in front of me. I look over at the open door. Sounds of Mariah preparing dinner still carry down the hall. No one else is in the house.
I close my eyes and try to picture the girl from my dreams. I’ve seen her reflection, but the image was fleeting. Flowing wavy ebony hair and honey eyes met me briefly. Pink lips and an oval face with skin like warm toffee. I picture the brown sari I saw looking down with my own eyes as Akasha crawled up onto the old Vancouver pier.
A thick fog flows over me and my mind’s eye grows dark. A light flickers in the distance, heading towards me, slowly opening up the scene around me.
I am seated at a writing desk in a finely appointed sitting room. My hands are brown again. The sleeves of my old-fashioned dress are navy-blue cotton with ivory lace trim at the cuffs. I am writing a letter.
Vancouver, September 10th, 1914
Laura, my friend, I can only pray that this letter reaches you some day. You may have learned that I stole away with Sanjay to come to Canada. Things went so terribly wrong. I was a stowaway in his trunk, our goal almost achieved. I was moments from being carried to freedom with my true love. God had other plans and I was cast overboard in an argument. I barely survived.
The ship’s passengers were detained at the port. Only a few were admitted. I did not see Sanjay among them.
My misery does not end there. I am being held by a man who said he ran a home for girls. I quickly discovered he is a liar, but it was too late. How could I have been so naive? I should have let myself starve on the street.
I do not believe I will ever find the money to return home. I cannot even afford to post this letter. If he finds this sheet of paper, he will tear it up and I will feel the back of his hand on my cheek.
If you read these words, do whatever may be in your power to put this letter in Sanjay’s hands. The Komagata Maru left Vancouver on July 23rd of this year. He may already be home as I write. I pray that he will come back to Canada, back to Vancouver. Whatever else you might do, please pray for me, and for my safety.
Your Loving Friend Always,
Akasha
I fold up the letter and stuff it into a pocket in the skirt of my navy dress. I will not risk leaving home unescorted, but I must hide my letter. I may not get a chance to write unobserved again for a long time. Where to hide it? What spot can I trust to be both safe and secret?
I walk around the room with an escalating sensation of urgency radiating outward from the pit of my stomach. I need a hiding place and quickly. The porcelain flower vase? No, this house is prone to arguments and the vase could be smashed. The underside of the sofa? No, not secure enough. Behind a painting? No, it could be moved or taken away. The fireplace? If I could find a loose brick, it might do until I have the money and opportunity to put it in the post. Is the grout old enough to crumble?
I test each outer brick around the fireplace. When I come to the top of mantle, one brick is slightly loose. I grab a letter opener from the writing desk and pry the brick loose. I scrape frantically at the grout left behind. I make just enough room for my letter to fit comfortably before I replace the brick. I sweep the grout rubble and dust into the fireplace with the toe of my shoe.
“Akasha?” says a smooth, deep male voice from behind me. And blackness returns.

I open my eyes to find myself still sitting on my plaid bedspread in Arbutus House. No sounds are coming from the hallway. Only white noise knocks inside my ears. My heart thuds thick beats that prickle with primal fear. I had been Akasha, again. I can feel her terror still gripping me. She was so afraid of being discovered.
I look down at my diary. There is fresh writing on the page, but it doesn’t look like mine. It looks like hers; Akasha’s. The text starts with “Vancouver, September 10, 1914 … Laura, my friend.”
It worked! I wrote her words again! It’s all in English to someone named Laura. Who is Laura? Does it matter?

Located on BC’s beautiful West Coast, Christine writes speculative fiction for YA, NA, & MG readers.  She has an undergraduate degree in writing and literature, a corporate background in communications and design, and an Etsy alter-ego named Sleepless Storyteller. Christine shares her eclectic home and lifestyle with her husband, daughter, and son.