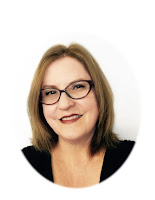 A note from Rhonda Frankhouser: I'm excited to be hosted by fellow SoulMate author, Carly Jordynn. I appreciate her eagerness to share other authors and their work with her readership. My debut novel, Return to Ruby's Ranch, which was released on Amazon from SoulMate Publishing on November 16, 2016, is book one of a contemporary western romance series that tells the story of the strong line of matriarchs of Ruby's Ranch. I'm currently working on book two in the series - Escape from Ruby's Ranch. I recently signed a new contract with SoulMatePublishing for a contemporary romance called Health Nut Café, which is due out in 2017. This is the booklove of my life - so far :) Neither book are the norm for romance - rather they have lots of twists and turns, murder and mayhem, but alas, the love stories are rich and real. Thanks so much for hosting me. Please visit my website at www.rhondafrankhouserbooks.com and leave me a note. I would love to hear from you.  Rj 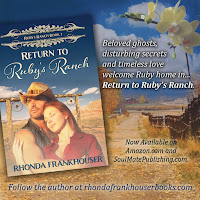 Ruby Lattrell spends her days caring for her ailing father and younger brother. When they no longer need her, her life lacks purpose. Then she inherits Ruby’s Ranch – the only real home she ever knew – the place where her mother mysteriously vanished.  The smell of fresh cut hay and the most handsome cowboy she’s ever seen, Billy McCallister, greet Ruby when she arrives at the ranch.

Billy always dreamed Ruby would return home. When he finally sees her standing on Granny’s porch, now a mix of that sassy young girl he once knew and the reassured, sensual woman she is today, he knows his heart hasn’t misled him.  Before she can fall into the timeless love that Billy offers, they must solve the mysteries that haunt Ruby’s Ranch. Will digging up the past hurt more people than it helps? Will the truth they discover tear Ruby and Billy apart?

Read on for an excerpt from Return to Ruby's Ranch:

The old, beat-up Chevy pickup came to an abrupt stop about a foot from the back of Ruby’s prized Jeep. She scowled with disapproval as the driver shoved open the door and dropped to his booted feet before the engine even had a chance to shut off.
"Help you, miss?" he asked, with a slow, deep twang, wiping the dirt from his hands with a handkerchief he’d pulled from his back pocket.
She squinted against the midday sun a little harder now as his voice rang a touch familiar. She watched him for an over-long moment, the mother cat twisting her lithe body around his legs in greeting. Sweat glistened on his tanned, muscular arms as he bent to pick up the kittens that came out to join their mother.
She smiled. There had to be something special about a man who elicited the love of animals. He was at least six foot two, and built like he could lift a hundred pounds straight over his head with no problem at all. A smudge of dried mud followed the line of his strong, stubbled jaw. He could be the most handsome man Ruby had ever seen. Not a sophisticated, city kind of handsome. More a Russell Crowe, gladiator, kind of handsome.
The irritated scowl returned to his face after he put the tiny, tabby kittens down, almost like he’d just remembered he wasn’t pleased about being pulled away from something important. This made him all the more interesting. Part of Ruby was glad she'd been such a bother. The day just became more intriguing.
“They’re adorable. And they seem to like you.” She tried to break the awkward silence.
Curious, soulful green eyes peered out from under his dusty Stetson hat. He gazed first at her well-worn Justin cowboy boots, then slowly up her long legs to the khaki shorts, pausing momentarily at the denim shirt she had tied loosely around her waist, showing just a hint of pale skin. His gaze stopped momentarily at the mess of red-blonde hair she’d pulled away from her face, before he finally met her eyes.
Ruby held her giggle as he finished his perusal, not wanting to make him self-conscious since she’d recognized him. Billy MacCallister. Had to be. My, how he’d grown from the runny-nosed brat who used to follow her around so many years before. He’d been the pain-in-the-butt, kid brother of her best friend.
But, this grown up Billy MacCallister was a whole different creature. Mercy, he’s definitely a full grown man now. Ranch life looks good on him.
WANT TO KNOW MORE ABOUT RHONDA FRANKHOUSER?
Rhonda discovered she had a knack for storytelling after she was diagnosed with cancer at a young age. To avoid dwelling on her own mortality, she sat down with pen and paper and got out of the way of her subconscious mind.  Words and characters poured out of her from some hidden place inside her soul.  She discovered that writing was not only cathartic and healing but a necessary function for her future sanity.

Her first novel, MY LAST DAY, gained the representation of agent Ben Camardi, at Harold Matson Company in New York. This is a heart wrenching tale of a young woman seeking love and closure on her last day of life. Her second and third novels, SHADOWING SOULS and RUBY’S RANCH, were quick to follow.  Each story has a contemporary romantic flavor, a solid family dynamic.

Rhonda lives in central California with her Kisa, (Knight in Shining Armor), their beautiful and talented daughters, and two mischievous pug puppies, Geddy and Ruby. When she is not writing, she is supporting hospice patients as a volunteer coordinator, playing golf with her husband, or reading the latest masterpiece from one of her favorite authors. She is a member of the RWA – PAN community and the local chapter, Yosemite Romance Writers.

Posted by Carly Jordynn at 9:44 PM